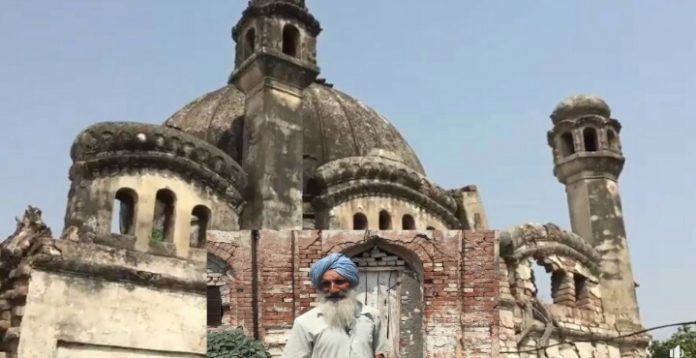 The 100 years old mosque in village Hedon Bet, Machhiwara Tehsil in Ludhiana still stands tall, despite zero Muslim population in the village. The Mosque that was built in 1920 lies abandoned for want of worshipers.

Thanks to village elders the mosque has not been demolished or being encroached upon by the land grabbers. The elders of the village refuse to let anyone demolish it as they believe it’s a house of God.

The elders of village are firm that as long as they live, the Mosque will stand and they will stand guard to prevent demolition or encroachment.

“We will not let anyone demolish the masjid, it is the house of god,” says Sarpanch Gurpal Singh todailysikhupdates.com.

The residents of the village overwhelmingly support the elder’s views and prevent anyone from occupying the abandoned mosque or any plan to demolish it.

The Sikhs have a long history of protecting other’s places of worship. The 6th Guru, Guru Hargobind Singh even built a mosque for Muslims.

The Muslim population of the village Hedon Bet of Ludhiana moved to Pakistan in 1947 abandoning their places of worship. This just one of the many properties listed under Muslim waqaf board left behind by the Muslims feeling to Pakistan.

There is a huge list of Muslim Waqaf Board properties in Punjab. These are; mosques, grave yard, Takia (burial place of a Sufi saint) Khanqah, school, orphanage, Idgah etc.

Most of them are encroached upon and the government of Punjab tops the list of encroachers. There are many Muslim properties that have been swallowed up by the land grabbing mafia of the state and there is no trace of the same.

Seeing the huge list of Muslim properties in Punjab, one relish how come the mosque in village Hedon Bet, Machhiwara Tehsil in Ludhiana remains untouched even till date unfazed by the vagaries of time.

Here is the official list of Muslim waqaf board properties that are encroached in Punjab.http://www.pbwakf.org/Encroached%20Waqf%20properties%20under%20Govt%20-%20Punjab%20Waqf%20Board.pdf

If someone can ascertain the monetary value of these property in Punjab and multiply it with all such property scattered in other states, one can safely say that Muslims of India do not need any dole from the Ministry of Minority Affairs, for scholarship or Haj subsidy, as they can manage their financial woes on their own from their own properties.

Syed Ali Mujtaba is a journalist based in Chennai. He can be contacted atsyedalimujtaba2007@gmail.com