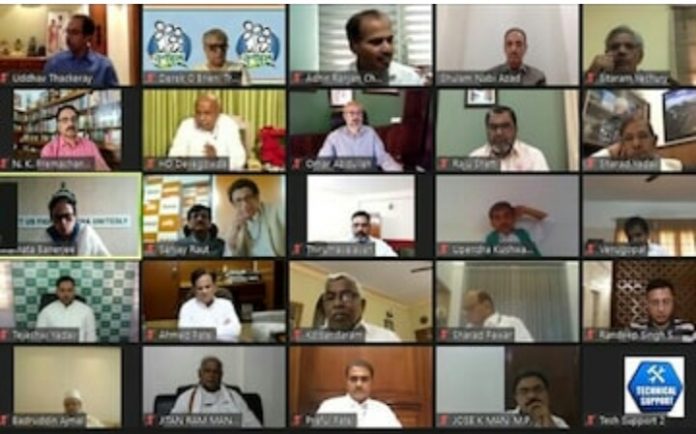 New Delhi: In a strong rebuke to the Prime Minister’s “grand Rs 20 lakh crore package” for Covid-19, Congress-led 22 opposition parties on Friday presented an 11-point charter of demand to the BJP-led central government including Direct Cash Transfer of Rs. 7,500/- per month to all families, outside the Income Tax bracket, for six months. These parties represent over 60 percent of India’s people alleged that government has failed in discharging its responsibilities in a timely, effective and sensitive manner as “grand announcements” have failed to alleviate the sufferings of people.

Addressing a meeting of Opposition parties convened to discuss the plight of migrants due to the lockdown, Congress president Sonia Gandhi launched a scathing attack on the government over its handling of the Covid-19 pandemic alleging that “The Prime Minister’s grand Rs 20 lakh crore package has turned out to be a cruel joke on country.”

In her opening remarks, Gandhi said the migrants and 13 crore families in the bottom half of the population have been cruelly ignored by the government. She alleged that the government is uncertain about the criteria for lockdowns and has no exit strategy.

On unilateral decisions by the center, she alleged that the spirit of federalism is all but forgotten and it has abandoned any pretence of being democratic.

The leaders of the 22 parties, who met through video-conferencing, discussed the situation arising out of the Covid-19 pandemic. These opposition parties, which represent over 60 percent of India’s people, passed a resolution urging the Center to immediately declare Cyclone Amphan as a national calamity in Odisha and West Bengal and called for substantially helping the two states in facing the impact of the disaster.

The meeting called by Gandhi was attended by the leaders of the Trinamul Congress (TMC), Nationalist Congress Party (NCP), Dravida Munnetra Kazhagam (DMK) and Left parties, among others.

Briefing the media about the meeting via video conferencing, Congress spokesperson, Randeep Singh Surjewala said twenty-two like-minded parties met today to exchange views on the extraordinary situation in the country arising out of the Covid-19 pandemic.

“The economy has collapsed. All sections of society face acute distress. Livelihoods have been destroyed. Lives have been lost.”

He said the opposition leaders pointed out that they have always extended their full cooperation to the Center considering the magnitude of the crisis, but the Union Government has failed in discharging its responsibilities in a timely, effective and sensitive manner.

“Grand announcements have been made but they do nothing meaningful to alleviate the sufferings of people and address the pressing concerns of farmers and farm labour, of migrant and other workers, of trade, & commerce, MSMEs and industry.”

They also urged the Government to reach out and engage in a dialogue with all political parties in a systematic manner, listen seriously to the suggestions that they have to make, activate Parliamentary institutions like Standing Committees and be genuine in helping the states financially. Opposition leaders also criticized the Rs 20 lakh crore package announced by the Center, terming its contents misleading the people of India.

Delhi’s ruling Aam Aadmi party, Samajwadi party and Bahujan Samaj party did not attend the meeting. When asked why did these parties remain absent? In response to this, Congress leader Surjewala said this question should be asked to these parties and whether they do support these demands presented today to the Center. ,

Opposition parties urged the Union Government to listen and consider the following 11 demands:

2: Free distribution of 10 kg food grains to all needy individuals, each month for the next six months. Increase the number of MGNREGA work days to 200 with the necessary budgetary support.

3: Free transportation for all migrant workers to their native places.

6: Procure immediately the Rabi harvest at the MSP and provide assistance for the produce to reach the market.

7: Release substantial funds to the state governments who are in the frontline of combating the pandemic.

8: Communicate in clear terms, the Central Government’s exit strategy from the lockdown, if any.

10: Present a clear and meaningful economic strategy focused on revival and poverty alleviation instead of propaganda. The Rs. 20 lakh crore package and its contents mislead the people of India and demanding a revised and comprehensive package that will be a true fiscal stimulus in order to stimulate demand in the economy.