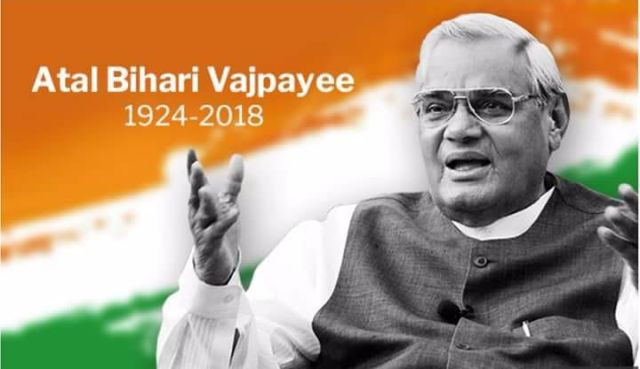 Yes ! Mr Prime Minister. Sometimes truth too slips out of your tongue. You very truly said that the death of our former Prime Minister Mr Atal Bihari Vajpayee is the end of an era. As a prime Minister, he was humane and humanistic, he was a careful listener to the voices of dissent, he always respected democratic principles, never ran away from accountability in parliament and won the best parliamentarian award from his political opponents , loved his “ gau Mata “ but never enjoyed any mob lynching , belonged to RSS and BJP but never spoke the language of hatred and fascism, and was a true patriot but as Prime Minister took a bus to Lahore and offered a hand of peace and friendship to our ‘ ‘enemy neighbour’ , encouraged and strenthened the Armed Forces but never got involved in a ‘RAFAEL DEAL’ He represented RSS and BJP in Indian polity but but never ever created an environment of fear in the heart of minorities. Although he was ‘brhamachari ‘ he never shamelessly patronised a shameful incident like ‘Kathua rape ‘.

He never boasted of having a 56 “ chest but nobody can deny that he had a large heart behind his seemingly insignificant chest. Most part of his political life he remained a ‘voice of dissent’ but whenever he gave vent to his dissidence,whether inside the parliament or outside , he never poured venom, instead he spoke poetry laden with satire and humour. He was an artful master of playing with words and human emotions but he never crossed the limit. He had a good insight of the Indian history— ancient, medieval and modern, but he never showed any contempt for the monuments built by Muslim rulers of India.

He twice adorned the Chair of prime ministership but he never tried to change the name of a road or a city because it carried a Muslim name. In mind he was a politician and at heart he was a poet and humane. That is what distinguished him from other BJP leaders and brought love and respect for him from all corners of the country. It doesn’t mean that he was without blemishes. The biggest and the ugliest blemish on his entire political career is that he failed to sack you , Mr Prime Minister , after Gujrat massacre allegedly planned , engineered and supervised by you.

He was a ‘man of conscience’ and I am sure this single failure on his part must have been a huge burden on his conscience till he breathed his last. His death , of course , is a colossal loss to India and to the world. I pay my civilian salute to him.

The author is ex president of AMUSU.

Muslims should treat May 23rd as the day for self-introspection