Pulwama: The casual workers (sweepers) in Municipality department at Kashmir valley, have been working very hard from dawn to dusk, as the frontline warriors of corona, since its outbreak.

In nook & corner of the valley, these warriors were seen working on frontline, to protect the people, from the coronavirus (Covid-19), by ensuring sanitization in cities, towns and other areas.

Even though, they are still out on roads and streets to keep their respective jurisdictions neat and clean with the motive to combat deadly Covid-19.

Not only during this pandenmic, but before COVID-19 outbreak, their role to sanitize cities, towns and other municipal limits is quite evident in most of the parts in Kashmir.

At one end, they are leaving no stone unturned, in combating Covid-19, and at another end, they are ‘not able to fulfill the needs’ of their families due to the ‘low pay’ for years.

A delegation of municipality workers while working in Tral town of South Kashmir have said that they are working very hard from ‘early morning to late evening’ but their demands were not fulfilled. 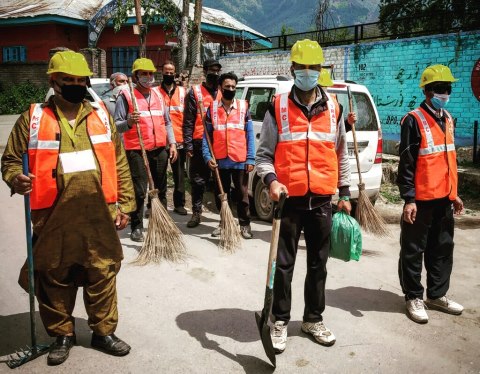 They said that “they have been requesting the government for hike in pay & regularisation for years but no concrete step is being taken to regularize them.”

A sanitation worker namely Shabir Ahmad has narrated how he is unable to take proper care of his family as the salary paid to him is very low.

“I am worried as my monthly salary is so low, due to which i am not able to feed my family properly,” he said.

Another worker Bilal Ahmad has said that “inflation is on high these days, due to which it become very hard” for them to feed their families with “Rs 6750” only per month.

“We get only 6750 per month, for working round the clock. Inflation is on high while as responsiblities are many,” Bilal said, adding that education of his children gets affected.

The workers have further said that they are working as casual employees for last ‘fifteen years’ with the hope that they will be regularised someday.

They said that ‘225’ rupees per day in this era is mere injustice for them as they are ‘not able’ to meet their needs with the low pay.

“I have three daughters. I am always trying my best to fulfill their needs but with the low pay i usually fail to satisfy them,” a worker Javaid Ahmad said, adding that authorities should ensure our regularisation now.

Many other casual workers have said that they are also facing difficulties as they are being paid equally, due to which most of them couldn’t afford to feed their families properly.

The workers said that they are working hard particularly in the Corona and are ensuring proper sanitization with their tireless efforts.

They demanded that authorities should ‘regulaise’ them and should ‘hike’ their pay so that they may meet their needs.

Executive Officer in one of the Municipal Committees, Manzoor Ahmad, has said that government has not enhanced their pay/regularisation yet in any place of Kashmir.

He said that their case is pending with the government and “if government will enchance it, it will be enhanced for the casual workers (sweepers) througout the valley”