Kolkata:  It may sound incredible but it is true. A Muslim NGO in West Bengal so far produced as many as 2500 doctors , 4000 engineers and 65 civil servants. Adding one more feather in the  cap, the NGO Al-Ameen Mission achieved unbelievable feat in this year’s NEET, the  country’s biggest medical entrance exam . It may be a sort of record for a Muslim organization as 370 students of Al-Ameen Mission cracked the NEET. Out of  370 successful candidates 319 got admission  in government colleges while 51  were  admitted in private medical colleges in West Bengal.

The man behind these fantastic achievements is M. Nurul Islam who’s missionary zeal  and tenacity for upliftment of the community is yielding spectacular results from last three decades.

Revealing his inspiration behind the success story of his mission a soft-spoken but fully determined  M. Nurul Islam told Muslim Mirror  that he was inspired by Ramakrishna Mission during his college days at Kolkata. Muslims in West Bengal are considered  educationally one of the most backward segments of the Indian Muslims who are numerically second largest group after the Uttar Predesh.

He said this year’s NEET results are encouraging and a record for a Muslim NGO working for the socio-educational upliftment of the community.

Furthermore, break up shows that 119 students selected in NEET are those whose total expenses were borne by the institution from Zakat fund while 176  are those who paid only 50 percent of the total expenses  in half paid category’ while  only 75 selected students were from the full payment category who paid 6000 rupees per month.

408 students of Al-Ameen Mission also selected to get admission in engineering courses.

There are a numbers of institutions and organizations have set up coaching facility to prepare Muslim students for NEET, JEE and other competitive examinations. However, Al-Ameen Mission’s achievements are envious which has emerged as the largest NGO working for the social and educational upliftment of the minority community in all 19 districts across the West Bengal.

M.Nurul Hasan started his institute  with only eleven students in a Madarsa building in year 1986  at his native village  Khalatpur , in Howrah district 70 km from Kolkata. 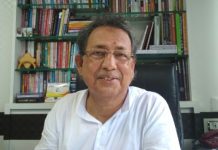 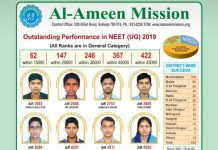