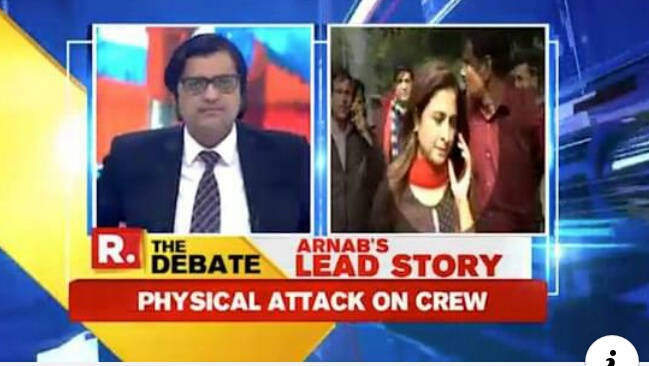 Barely a year after demands to remove a portrait of Mohammed Ali Jinnah triggered violent protests at Aligarh Muslim University, the institution is again in the eye of a storm, as fourteen students of the university have been booked for sedition after they entered into a scuffle with the crew members of Republic TV news channel and ABVP members on the varsity campus.

The students, according to the police, also raised “Pakistan Zindabad” slogans.

However Vice President of Aligarh Muslim University Student Union (AMUSU),Hamza Sufiyan refuting the claim, told Muslim Mirror that if any evidence of such a thing emerges, he is ready to go to jail. Hamza added “Republic TV crew entered the campus without PRO permission with an intention to provoke students. They called AMU a university of terrorists- this is the same university which has given India its President. How can they say this?”

On Tuesday, a group of AMU students got into an altercation with the crew of a TV news channel over reports of a visit by AIMIM MP Asaduddin Owaisi. Cases under Section 124-A (sedition), Section 307 (attempt to murder) and eight other sections of the IPC were registered against nine students of the AMU, including the president and vice president of the students union as both sides filed complaints against each other. Personnel of the Rapid Action Force have been deployed around the AMU campus.
ABVP members claimed a motorcycle of one of their members was set ablaze after the altercation.

The tiff between the TV channel and AMU students was triggered by a protest launched by the ABVP over the visit of Owaisi, whom they wanted banned. While Owaisi did not turn up, the crew of the TV channel went to cover the anticipated event. An AMU spokesperson said the TV channel did not obtain permission to film inside the university campus.

A large group of AMU students gathered at the Bab-e-Syed gate, demanding the suspension of Ajay Singh, a prominent ABVP leader who is a postgraduate student in the Faculty of Law. He is the grandson of BJP MLA Dalvir Singh.
Meanwhile, the students at AMU have urged the authorities to drop the sedition charges against the students. 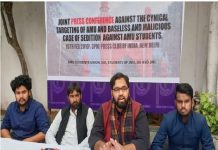 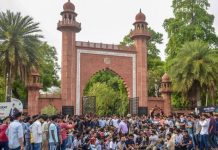 No proof of sedition against AMU students in early probe: Police