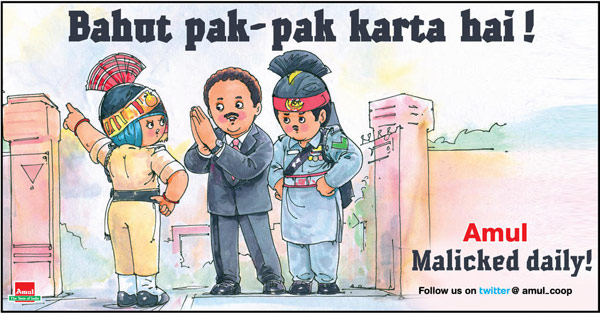 The cartoon-cum-ad carries the title: Bahut pak- pak karta hai (means you talk too much). But the word pak which is also used as initial of Pakistan gives double meaning of the title. The cartoon shows Indian guard – which is Amul baby — uttering this line when Pakistan minister is entering India at Wagah border. The guard utters this line and shows the minister the door to Pakistan. The minister folds his hands seeking forgiveness and pleasing the guard so that he could have a bite of Amul butter.

On its twitter page (twitter@amul_coop), the company says the Amul topical is on Pakistan Interior Minister’s controversial remarks.

During his visit (Dec. 14-16) the minister’s two statements had hit headlines in India. In one he had reportedly equated 26/11 (Mumbai attacks of Nov. 2008) with Babri Masjid demolition. In another, he had said terror suspect Zabiuddin Ansari alias Abu Jinda is the source of Indian agencies.