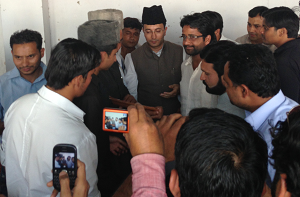 Aligarh, April 8: The Aligarh Muslim University today clarified that the allegation leveled by the suspended President of the Students’ Union that they were prevented from meeting Minister of State, Mr. Jitin Prasada, to present their case for restoration of minority character of AMU, was false.

“The true facts of the case are that the office bearers of the Students’ Union arrived half an hour late after the function had commenced and thus could not find a place to sit. The office bearers had demanded to be seated on the stage which was not granted. They attempted to mount the stage, which was prevented by volunteers. The Students’ Union representative created a commotion during the singing of University Tarana and the National Anthem. They thus displayed utter disrespect,” said Dr. Rahat Abrar, Public Relations Officer, AMU.

It is well known that the Vice Chancellor General Shah has been striving for restoration of minority character of AMU and has regularly been holding meetings in this regard.

The Vice Chancellor further said that the allegation that “I am forcing student leaders to join Congress Party is a blatant lie. The Vice Chancellor has no political affiliations. His loyalties are only to AMU. During the meeting in the VC’s office on 05th April 2013, Shahzad Alam declared that he was joining the BJP. I merely advised him not to indulge in political activities while he was member of the Students’ Union”.

The Vice Chancellor said that the AMU is a Central University and has invited leaders who could benefit the University. In fact, the Vice Chancellor during his recent meeting with the Honorable Chief Minister of Uttar Pradesh had also invited him to AMU so that problems could be projected to him for resolution.

The Vice Chancellor made it clear that Shahzad Alam was unreliable and a confirmed liar who had been attempting to extract money from various sources. His behaviour was unbecoming of a student of AMU and his allegations should be treated with contempt.