Ayodhya : The air of uncertainty is fast evaporating and it being replaced with a sense of finality that is settling in.

The waters of Saryu run still and deep but there is bustle on the ghats and the talks invariably wound around the Ram temple.

With less than two months left for the Supreme Court verdict, Ayodhya is already preparing to celebrate the return of Lord Ram, in the true sense of the term, this Diwali.

Mahant Narendra Giri of the Akhilesh Bhartiya Akhara Parishad which is the apex body of saints, said: “Now that the Ayodhya issue is coming closer to its logical conclusion, this is a moment of extreme joy for the saints who have been waiting to see the grand Ram temple.

“There are no apprehensions nowonly a sense of urgency in starting the temple construction after the court announces its verdict. We are happy that even the Muslim side has conceded that the birthplace of Lord Ram was at the ”chabutra”.”

Mahant Suresh Das, of Digambar Akhara, was equally elated. “It is now a matter of days before Ram temple construction begins. The Supreme Court judgment is likely to be in our favour and there cannot be a greater joy than this. We are blessed to be alive to see the temple being constructed.”

BJP MP Sakshi Maharaj said he had a strong feeling that the temple construction would begin from December 6.

“I feel it would be apt to start the temple construction from December 6, the day the Babri mosque was demolished.”

VHP spokesman Sharad Sharma was more cautious when he said: “The celebration in Ayodhya will begin with ”Deepotsav” on Diwali. We are keeping our fingers crossed and pray that the verdict favours Ram temple.

“Millions of Hindus across the globe are waiting to see the grand temple.”

Zafaryab Jilani, All India Babri Masjid Action Committee (AIBMAC) convener and member of the All India Muslim Personal Law Board (AIMPLB), however, firmly said: “I will not comment on the issue. We have full faith in the judiciary and will wait for the verdict.”

Iqbal Ansari, a litigant in the title suit, said that he was also awaiting the verdict. “I do not want to jump the gun. I want a solution to the problem and have waited for years. I will wait for another few months.”

Meanwhile, stone carving and cleaning of slabs has already begun at Karsevakpuram, which is the temple workshop since 1990.

A local leader, Virju Yadav said that more stones would be brought in starting Navratri. He said that local priests regularly visit the workshop to see the progress being made.

“We have completed about 70 per cent of the stone carving. The first floor is complete. We will be engaging about 250 artisans from October to speed up the work,” he said.

Mahant Dinendra Das, of Nirmohi Akhara, which is one of the players in the dispute, said: “We have been living to see the Ram temple taking shape and we are confident that the wishes of millions will be realized very soon.”

While the saint community is confident of the verdict going in favour of the temple, the local people are looking forward to a ”boom” season in the coming years.

Rajan Agarwal, who owns a hotel in Ayodhya, said: “After years of lull in business, we are now looking towards a boom. Once temple construction begins, we will not be able to cope with the rush. We will have leaders, politicians and tourists coming to see the temple taking shape.”

The Yogi Adityanath government has already launched a massive drive for development of the holy city. Ayodhya is being developed as a tourist attraction with roads being widened, ghats being spruced up and heritage temples being refurbished.

For Nalini Shahi, a school teacher, the apex court verdict will hopefully bring an end to “decades of apprehension”.

“Since the demolition in 1992, we have been living in an atmosphere of uncertainty and apprehension. Even at the slightest provocation, tension builds up here. No one knows what will happen next. The verdict now will settle the dispute for all times to come,” she said.

Raghav Rai, a retired government employee, said that the Supreme Court verdict in November would bring a decade and a half old dispute to an end.

The dispute began in 1885 when Mahant Raghubir Das filed a plea in Faizabad district court seeking permission to build a canopy outside the disputed Ram Janambhoomi-Babri Masjid structure and the court rejected it.

In December 1949, idols of Ram Lalla were placed under a central dome outside the disputed structure and the following year, Gopal Singh Visharad filed suit in Faizabad district court for rights to worship the idols of Ram Lalla.

The Uttar Pradesh Sunni Central Waqf Board filed suit for possession of the site in 1981 which initiated the ”Ayodhya movement” with the Bhartiya Janata Party taking a lead in the matter.

The Babri mosque was demolished in 1992 and for the next 25 years, Ayodhya has remained at the centre stage of Indian politics. 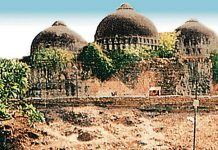 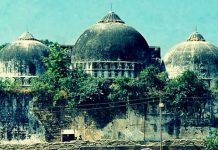 Need for reconciliation with justice : Babri Masjid demolition and aftermath