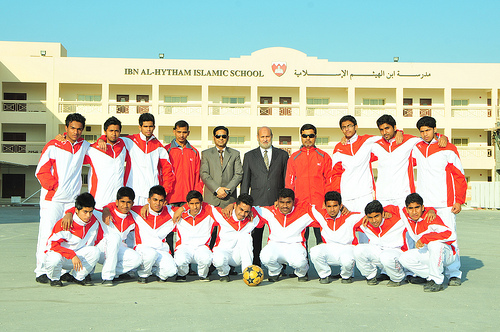 New Delhi: The Ibn Al-Hytham Islamic School, Bahrain was among 36 reputed schools from India and abroad that participated in the recently held National CBSE Football Tournament in Haryana. The Bahrain school had won the league match in Bahrain and qualified to take part in the national tournament organized by CBSE on Dec. 12-17 at DAV Public School campus in Panipat district of Haryana. The Bahrain school showed good performance in the tournament though it could not get into top three.

Of 36 schools that participated in the tournament, 6 were from Gulf region representing Bahrain, Kuwait, Oman, Saudi Arabia and UAE.

The team of Ibn Al-Hytham Islamic School (Bahrain) had 16 players from different nationalities including Bahrain, India and Bangladesh.

After taking part in the football tournament the team visited various historical places and monuments in Delhi and other parts of the country. In Delhi they visited Jama Masjid, Red Fort, Humayun’s Tomb and Qutub Minar. The team also visited Taj Mahal in Agra. The team enjoyed every moment of their 10-day stay in India.