Demonstrating on the eve of the 35th anniversary of the Union Carbide disaster in Bhopal, the victims demanded free health care, clean-up of the contaminated lands and adequate compensation from Dow Chemical, current owner of Union Carbide. The organizations said that the Madhya Pradesh Government’s plan to build a memorial to the disaster at the factory site was but a cover-up for this ongoing crime against the environment and people.

“It is because of the reckless dumping of extremely poisonous waste within the pesticide factory till 1984 and outside the factory in 1996 that the groundwater has been found to be contaminated in places over four kilometres from this factory. Since 1990, the groundwater in and around the factory has been tested some 16 times by government and non-government agencies and these have shown that pesticides, heavy metals and poisonous chemicals, including six persistent organic pollutants are present at depths greater than 30 metres and distances of several kilometres from the factory”, said Rashida Bee, who along with her colleague Champa Devi Shukla is a Goldman Environmental Prize awardees.

Nawab Khan of the Bhopal Gas Peedit Mahila Purush Sangharsh Morcha said: “According to the latest study by the Indian Institute of Toxicology Research, a central government agency, the groundwater in 42 communities with a total population of nearly 100, 000 is contaminated and it continues to spread. The first thing that has to happen for ending this ongoing second  environmental disaster in Bhopal, is a comprehensive scientific assessment of the area within 5 kilometres of the factory. We took the generous offer of officials of UNEP (United Nations Environment Programme) to carry out scientific assessment of the Bhopal site to Prakash Javadekar when he was the Minister of Environment. He refused to accept the offer saying foreigners should not be involved in this project. Despite reports of extremely toxic chemicals in the groundwater by two central government agencies – the Central Pollution Control Board and the National Environmental Engineering Research Institute – the Central government has refused to acknowledge the growing problem let alone act on it.”

“A study carried out by the state government in 2005 showed that residents who were drinking the contaminated groundwater were suffering from diseases of the eyes, skin and the respiratory and digestive systems. Despite this, and despite the Supreme Court of India’s clear directions in 2012, over 10 thousand families who were exposed to the contaminated groundwater for up to 20 years continue to be denied the facility of free health care by the state and central governments.” said Rachna Dhingra, a member of the Bhopal Group for Information & Action.

Ms Nousheen Khan of Children Against Dow Carbide said: ‘The “polluter pays principle” which is followed both in USA and India very clearly makes Union Carbide legally liable for clean-up of the contaminated soil and groundwater and for health damages caused by toxic exposure. Since taking over Union Carbide in 2001, Dow Chemical continues to hold the illegal position that it is not liable for the ongoing contamination. It is the responsibility of both the state and central governments to make Dow Chemical pay for the clean-up and compensate the victims. Instead they are planning to pour concrete over the contaminated factory site and build a memorial to the disaster as a cover up for the corporations”. 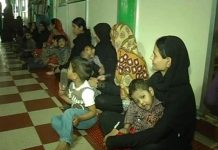 Kids with deformities of Bhopal gas-hit families can be rehabilitated