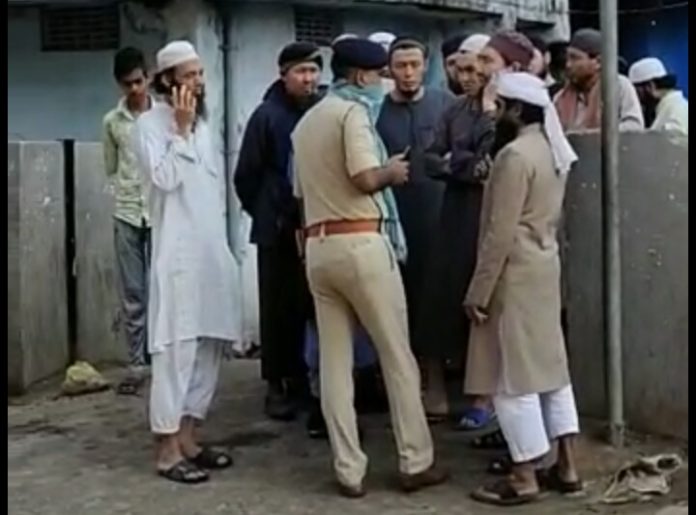 Patna/ New Delhi: Amid Coronavirus pandemic a 12-member Tablighi Jamaat of foreign nationals was detained by the city police from a mosque here on Saturday after local non-Muslims raised the alarm over their presence.

The local people alleged that the mosque management had given “shelter” to these foreign nationals who are said to be from Kyrgyzstan, a Central Asian nation. Local non-Muslims forced the police to take these people (jamaat) into their custody as they made wild allegation that they (foreign nationals) were “hiding” in the mosque to evade medical test.

According to reports, the locals panicked over the foreigners’ presence given the ongoing Corona virus scare and complained that they could be “hiding”.

The mosque is located in street number 74 of Kurji area of Patna, and falls under Digha police station, as per reports.

A UNI report says the police took them to All India Institute of Medical Sciences (AIIMS)-Patna for Coronavirus test. The report says that as per the police, the group is associated with religious discourse and arrived from Kyrgyzstan via Delhi on the morning of 23 March.

The foreigners would reportedly be kept in isolation for some time.

The urban areas of Bihar are currently under lockdown till 31 March, after Patna reported its first death from Covid-19 and two more positive cases.

The Bihar government has declared lockdown in urban areas of Bihar with immediate effect till March 31 after the first Covid-19 death and two more positive cases in Patna hospitals on Sunday.

They are providing an opportunity to saffronised media to unleash a negative propaganda to tarnish the image of mosque and Muslims.

“These foreigners are spreading virus in the country, they should be sent back immediately” local residents can be heard saying in the video.

In this back drop, local Muslims pleaded the Tablighi Jamaat officials to follow the guidelines announced by the central and state governments in this hour of pandemic.

Meanwhile, the Tabilghi Jamaat’s central leadership has taken some corrective steps. According to Maulana Mohammad Saad’s (the de facto AMeer)’s son, all the foreign nationals were asked to go to their respective embassies and domestic people in the Jamaat were asked to proceed their respective places. Furthermore, he also issued a directive to the Jamaat network not to send any Jamaat to the central headquarters (Markaz – e- Tabligh) at Nizamuddin , New Delhi. The police also visited the Tabligh headquarters and cleanliness drive was carried out.