New Delhi, April 2: The Union Home Ministry on Monday said it has sent central forces to assist Madhya Pradesh, Uttar Pradesh and Punjab in maintaining law and order in the wake of nationwide protests against the dilution of the SC and ST Prevention of Atrocities Act.

The ministry has also asked the states “to take all preventive measures and maintain public order and ensure the safety of lives of people and property.”

“A review petition has been filed in Supreme Court today. I would appeal to all to avoid tensions. I seek their support.

“We should not create a situation that leads to communal tensions. It is the moral responsibility of all the political parties to cooperate so that any kind of tensions can be avoided,” he told media persons here. 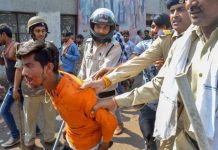 NCHRO condemns attack on the protestors during the Bharat Bandh