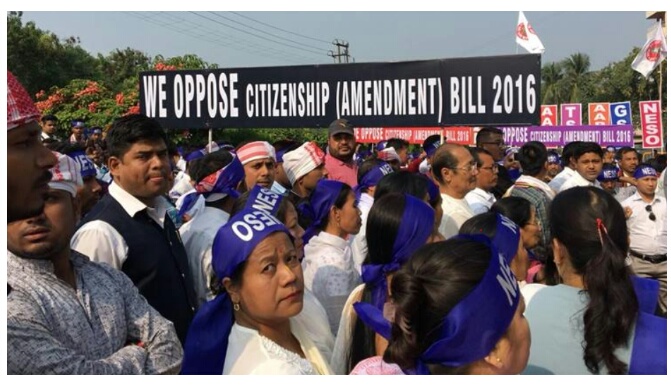 New Delhi: North east students are also up against the controversial the Citizenship (Amendment) Bill 2016 as their representatives today knocked door of the national capital and announced that they would continue the agitation against the bill till to its logical ends.  Students leaders also came down heavily on the Center and the ruling BJP saying it has been playing “communal” politics  with the people of this region.

NESO   leaders also thanked all the component organizations who have worked very hard and sacrifice a lot to oppose this draconian Bill.   They also   appreciated the stand taken by the BJP allies’ governments in the region.

They also  said the  Nitish Kumar, Chief Minister of Bihar in which his party the JD(U) has even taken a Resolution in their National Executive Council to oppose this CAB.

“NESO would also like to express its deep sense of appreciation to the different Political parties whom we have met and have extended their unstinted support to this cause particularly the Shiv Sena, Congress (I), SP, BJD, TMC, DMK, SAD, NPP, AGP,TDP, BPF, CPI, CPM, IPFT Tipra Ha, NCT, NDPP,NPF and also even other political parties who have extended their support in opposing this Bill. NESO, could not forget all  the people who were injured during this movement especially in Tripura, Manipur and Assam and salute their bravery and wish for their speedy recovery and their sacrifice has not gone in vain.”

Calling this momentous occasion as a ‘Moral Victory’ for the indigenous People of North East, they said the people of the region achieved installing this Bill is only because of the united continuous movement of the people.

“This also goes on to show that the Government of India will not concede to our demands on a platter but we have to fight and struggle for the protection and survival of our indigenous people of North East. Lastly, NESO would like to give a strong warning to the Government of India not to adopt, implement policies which is detrimental to the interest of indigenous people of North East.”