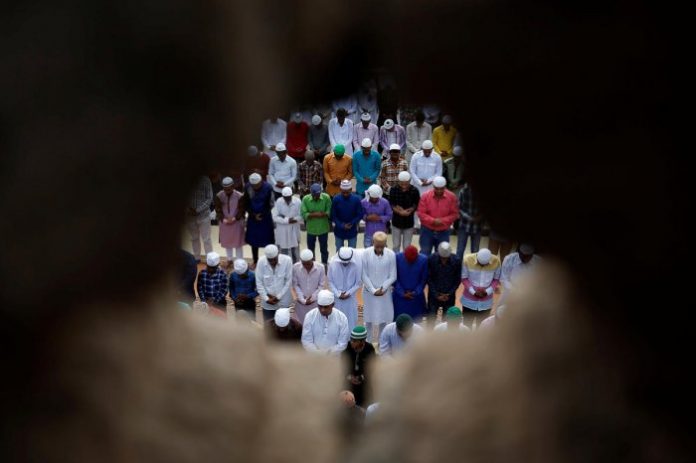 New Delhi :Around 3000 Dalits in Tamil Nadu’s Coimbatore, who had said  -post wall tragedy  in December 2019- that  they would  convert to Islam in phases from January 5 , have started converting to Islam reported India Today.

On December 2, after heavy rains lashed Mettupalayam and the surrounding regions, a wall which was claimed by protesters in the region to be the “wall of discrimination” collapsed on three houses and resulting into death of   17 Dalits.

The  ‘wall collapse’ tragedy   which  led to the death of 17 Dalits ,seemingly  promoted  over  3,000 people from the Dalit community  to announce  that they were to convert to Islam .

Illavenil, the state secretary of the Tamil Puligal Katchi, told India Today that 430 people have converted to Islam and many more are in the process of the conversion.

This was the breaking point for many Dalits in the region who claimed that they have been regularly discriminated.

“We converted to Islam all because of the prevailing caste injustice and untouchability. For example, any dalit who is underprivileged could not enter into Mariamman [Goddess Durga] temple. Tea shops have discrimination here. We can’t sit with other people equally in the government bus,” said Mohammed,originally known as Marx, converted to Islam soon after the December 2 event.

Illavenil, who has converted to Islam, said, “We decided to leave Hinduism according to what Ambedkar said. I need to lose my identity, which means I need to get rid of the caste remarks such as Pallar, Parayar, Sakkriyar. I can live with self-dignity only when I shed this cast-based identity. While following Hinduism because of our caste, we aren’t even treated like humans.”

Another youngster named Sarath Kumar who converted to Islam and changed his name to Abdhuallah said, “While 17 of our people were dead, no Hindu voiced for us. Only the Muslim brothers stood with us and protested for us. Where is Arjun Sampath who said that he would voice for the Hindus who are persecuted? Where is that leader? Our Muslim brothers invite us to their houses. Hindus never called us. Would you make me enter the common temple? We could enter any mosque though. I have visited four to five mosques after converting. I worship god there with all levels of people. But would you permit me to enter Mariamman temple and seek god?”

In regions like Coimbatore where these mass conversions are underway, Dalits face  all kinds of discrimination right from entry into temples to  the burial ground to discrimination towards Dalits at tea shops and public space.

They are still called by their caste names. Though many have shied away from raising their voices against this, the younger generation seems to be more vocal.

IN THE AFFIDAVIT SUBMITTED FOR CONVERSION, ALL OF THESE MEN HAVE WRITTEN THESE FIVE POINTS:

I belong to the Hindu religion, Arunthathiyar class by birth.

My family respects and follows all the principles of Hindu religion till this day. I don’t have any hatred towards Hinduism.

For the past three years, I was inspired by the Islam and I decided to follow the religion because of it’s religious laws and doctrines. This decision wasn’t taken with any guidance.

I wholeheartedly adopt Islam and I would follow it truly.

I believe that God is one and Mohammed Nabi is the last messenger of God. I accept Islam completely and convert to be a Muslim.