Panaji  : The Indian Constitution is in danger, Goa’s Archbishop Filipe Neri Ferrao has said, adding that a “new trend” of monoculturalism, which demands uniformity in what and how one eats, dresses, lives and even worships, is putting human rights at risk.

In the latest annual pastoral letter to Catholics in Goa, Ferrao also exhorted agencies of the Church in Goa to actively participate in social movements and urged lay Catholics to play an active part in politics.

“At the time of elections, the candidates confuse the minds of many people by making false promises. And the people, on their part, often sell their precious vote for selfish, petty gain.

“Today, our Constitution is in danger, (it is a) reason why most of the people live in insecurity,” Ferrao said in his pastoral letter for 2018-19 which was formally released on Sunday but circulated only on Monday.

“In this context, particularly as the general elections are fast approaching, we must strive to know our Constitution better and work harder to protect it.”

In the letter, which comes two weeks after Delhi Archbishop Anil Couto warned about an emerging threat to India’s “democratic and secular fabric”, Ferrao also alleged that human rights were being trampled in the name of development and mono-culturalism.

“In recent times, we see a new trend emerging in our country, which demands uniformity in what and how we ear, dress, live and even worship: a kind of mono-culturalism. Human rights are under attack and democracy appears to be in peril.

“The various minorities fear for their safety. In short, respect for law is frankly on the decline in this country,” said Ferrao, who is the spiritual and religious leader of Catholics in Goa who account for 26 per cent of the state’s population of 1.5 million.

“People are being uprooted from their land and homes in the name of development. Pope Francis says that ‘the first victim of development is the poor person’. It is easier to trample upon the rights of the poor, because those who will raise their voice for them are very few.”

Calling for the participation of Catholics and Church communities in politics and social movements, Ferrao said such involvement was “vital” to the creation of a just community.

“Our parishes and small Christian communities ought to be immersed in this mission of the Church. They should be open to the problems of the world… this social concern should not only remain within the confines of the parish community but should reach out to the whole state and country at large,” Ferrao said in the letter.

“It is advisable that the lay faithful play an active role in the political field; they should, however, follow the dictates of their conscience while doing so and shun ‘sycophantic’ politics. They should thus strengthen democracy and, on the other hand, help to improve the functioning of the state administration.”–IANS 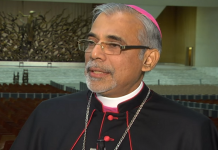