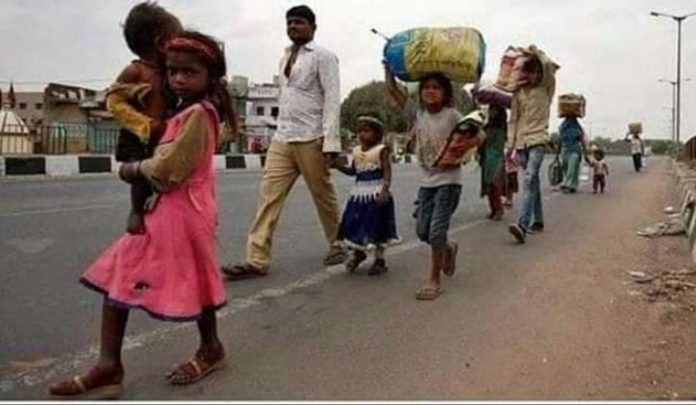 Will Coronavirus be a curse for India’s poor? The experts are calling the COVID 19 as the once in a century pandemic that has killed more than 20000 people across the world, the majority of them in Europe and afflicted hundreds of thousands of people. There are chances that the poor will be hit hardest by the scourge called Coronavirus.

The entire world seems to be under the lockdown. From Europe to Asia and much of America, both North and South, the world has closed down, closing borders, shutting airlines, stopping passenger trains and bus services, besides ordering malls and shops shut for the foreseeable future.

Prime Minister Narendra Modi, who first announced a 14 hour lockdown on 22 March, has enforced a complete 21 day lockdown that will force people to stay indoors and not come out except in case of emergencies. The law enforcement agencies have taken tough measures to ensure that people are kept inside their homes. In Delhi, in a single day, more than 5000 people were detained for violating the lockdown announced by the government. On the same day more than a thousand vehicles were impounded by the police. The overzealous policemen not just canned the common people trying to find groceries, they also didn’t spare delivery boys of e-retailers who were out to deliver essential items to harried people in metro cities. Consequently, within hours of the lockdown all the activities of leading e-retailers including behemoths like Amazon and Walmart owned Flipkart came to a grinding halt.

There is no denying that the lockdown is justified given the fact that the killer respiratory illness caused by the new pathogen continues to spread throughout the world unchecked. Till now the number of those people infected has gone up to more than 465,000 people. As of now at least 21,000 people are said to have died of it. However if we take into account the comments by experts, the number of infected and those who have died of the latest pandemic, must be much more given the limited facilities available for testing the people. Only those people are tested who suffer from extreme respiratory diseases coupled with high fever that correlates with late signs of Coronavirus.

In India, till now there is very limited availability of testing kits and therefore very few people, only those who have history of foreign travel along with clear signs of COVID-19 are being tested by the few hospitals designated to screen the patients. Many people with the signs of COVID 19 but without any foreign travel history in recent past are quarantined at home. This is apparently to ensure that the people who really need to be screened and tested are actually tested and the hard-pressed resources are not squandered.

However, the complete lock down that is in place in much of the country from 22 March has put the poor in the worst possible situation. They are in catch 22 situation. If they go out to earn their livelihood –not possible during the ongoing lockdown as all business and factories are shut –they are expected to be infected by the COVID-19 and if they remain confined to their homes they don’t have anything to eat. Zuber Meenai, a Professor of Social Work at Jamia Millia Islamia University tells me that “the homeless, marginalized and those on the edges of society would be the worst affected by this complete lockdown. Most of them are dependent on the informal economy that is bound to collapse. Head-loaders, porters, domestic workers, small vendors etc may find it very tough to survive in the days to come. In the absence of any recognition of their work and a policy there is little the government can and would do for them”.

Some experts have said given the complete lockdown and the all pervasive poverty across the country more people may die of starvation than the ones dying of Novel Coronavirus. With the price of essentials rising that is bound to happen in coming days, survival will become a challenge for many. “There is bound to be a chain reaction. Despite government assurances, prices of essential commodities are bound to go up. In the absence of any income, even foods at controlled rates would be out of their reach, leading to indebtedness. There is need for income support to such sections so that they are not only able to survive but also take care of minor medical and other expenses as well” says Prof. Meenai.

Super rich in India control a disproportionately high amount of national resources. A report by the Oxfam says around 1% of the population in the country holds as much as 73% of the national wealth. In complete contrast 670 million Indians control just 1% of the national wealth. A report by the Suresh Tendulkar Committee says that poor still comprise India’s 29.6% or as much as 300 million in absolute numbers. A report by the Rangarajan Committee in the year 2014 said that there were around 454 million poor living in the country still surviving on bare minimum.

Experts are worried about the impact of the complete lockdown on poor across the country. Already the visuals of poor laborers, masons, unemployed people trying to find something to eat are being splashed on almost all the television channels. From Lucknow to Patna and Kolkata to Bhopal such visuals project a picture that is hard to miss. Young kids pleading with media persons to get them food can be seen on any television network right now. As movement has been completely curtailed these people are going to realize that survival for the next 21 days is going to be extremely difficult.

Dr Thekkekara Jacob John, an emeritus professor at the Christian Medical College, Vellore in an interview with the Telegraph said that the complete lock down announced on March 23 doesn’t seem to be a well planned response to the Coronavirus crisis. He says the Central Government has panicked and announced a step that was not really well-thought out or planned in advance. “India seems to be imitating only one part of the solution — the lockdown. But China also helped its people under the lockdown to procure food and other supplies, ensured adequate monitoring of the population so that anyone who developed symptoms would be tested immediately and isolated. Instead, our lockdown announcements appeared to be abrupt” he goes on to add.

There is every reason to fear for the well-being of the poor. While Prime Minister Narendra Modi has asked people to support nine families during the shutdown, it seems more of rhetoric than practical. “Whoever has the capability, take the pledge to take care of 9 families for 21 days. It will be a true ‘Navratri’. Due to the lockdown, animals are also facing trouble. I appeal to the people to take care of the animals around them,” Prime Minister Modi said. When people are not allowed to go out of their homes and fear of COVID 19 has become so pervasive that people are not interacting with others, how people can move out. Many of the people have complained being mercilessly being canned by police when they went out to get essentials for them. Even the delivery boys of e-rtailers were beaten so bad that they had to announce the immediate suspension of services, only announcing to restart when they were reassured that it wouldn’t happen. However, these services are yet to be fully restored.

Many people are calling the PM’s advice as abdication of responsibility. When the US government has announced a $2trillion package that will give $2400 to every family, with $500 extra for every dependent child, what our government has done is to announce mere appeals for support. The only state government that has announced a comprehensive bailout package in the country is Kerala. “States like Kerala and Delhi are planning to provide succor to the needy. Kerala I think is already doing it although their mechanism is not known. Only those states that have a good local level governance like panchayats and urban local bodies would be able to reach out” Meenai says.

While the Union Government has announced Rs 1.7 lakh crore lockdown package for poor, this seems rather inadequate and wanting in many aspects. The Government has announced Rs 50 lakh per person as medical insurance for paramedics, ASHA workers and doctors. The government announcement says that as many as 8.69 crore farmers would be given Rs 2,000 immediately through direct cash transfer. However, Meenai says this is inadequate and there are reasons that the benefit may not reach the affected people in unorganized sector. “The food security announcement made by the government again missed the buzz for migrants stranded due to transport lockdown. Most of them have no ration card or NFSA card” says he.