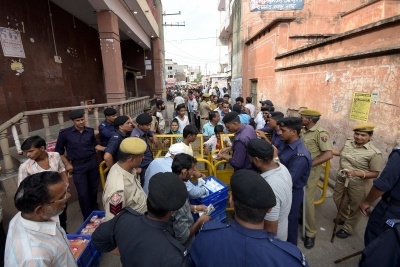 Jaipur, Oct 9 (IANS) Rajasthan”s Malpura town witnessed an untoward incident of stone pelting on a Dussehra procession, which led to protests and tension in the area.

Amid strict security the Ravana effigy was finally burnt at 4.30 a.m. on Wednesday. The Dussehra maidan turned into a fortress with heavy security in and around during the time the effigy was being burnt.

The administration tried to control the situation, and in view of the heightened tensed atmosphere suspended the internet services and clamped curfew since midnight, police said on Wednesday.

District Collector K.K. Sharma and Superintendent Police (SP) Adharsh Sidhhu along with a heavy police force were present at the location.

Malpura SHO Dalpat Singh said that a few miscreants have been detained. “We also have video clippings with us which we are looking into to nab the accused. Presently, the situation is under control, however, we are leaving no stone unturned,” he added.