Jaipur : State Parliamentary Affairs Minister Shanti Dhariwal and Leader of Opposition Gulabchand Kataria on Friday had a debate in the Assembly over the death of a 25-year-old Dalit youth Jitendra Khateek in police custody on Thursday.

Dhariwal informed the House during the Zero Hour that Barmer Superintendent of Police Sharad Chowdhary has been put under APO (awaiting posting orders) status over the youth”s custodial death and an SHO was suspended.

Even other police personnel were line attached and a judicial inquiry has been ordered in matter. ADG, Civil Rights, and the IG of Jodhpur have reached Barmer for further probe, he said, adding that an inquiry is being conducted by an Additional SP, CID-CB.

Dhariwal in his statement in the Assembly said the police detained Khateek on informative ground that he has stolen pipes after which he spent a Wednesday night at the police station and on Thursday, he was rushed to the district hospital as he complained of chest pain.

“Doctors declared him brought dead soon after he reached hospital around 2 p.m. on Thursday, said Dhariwal.

The minister further stated that the disciplinary action was taken against the Barmer rural police station as the victim was kept at the police station despite no FIR registered against him.

“A case has been registered under section 302 (murder) of the IPC and other relevant sections of the SC/ST Act and appropriate action will be taken,” he said adding the family members were staging a protest and autopsy could not be conducted.

“They are demanding a compensation, a job to a dependent and strict action against the accused the policemen,” he added.

Deputy leader of opposition Rajendra Rathore cited the compliant lodged by Khateek”s brother and said the deceased told his brother that he was tortured all through the night. Thereafter, he was taken to hospital at 2 p.m. where he was declared brought dead. Isn”t this a custodian death?

He demanded a CBI probe in the matter.

The opposition BJP also demanded a compensation of Rs 1 crore to the family as the Leader of Opposition Kataria asked the government to announce a package for the victim”s family.

There was ruckus in house when Speaker CP Joshi did not allow other BJP MLAs to speak in the matter which resulted in an uproar in the House. The legislators went into the well and protested.

The speaker questioned the minister if the government has plans to bring a law to announce a package to the families of custodial death victims on which minister answered that the government is taking action based on the circumstances. 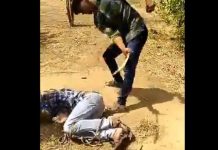 Dalit boy tied up, thrashed by saffron-clad men in Rajasthan