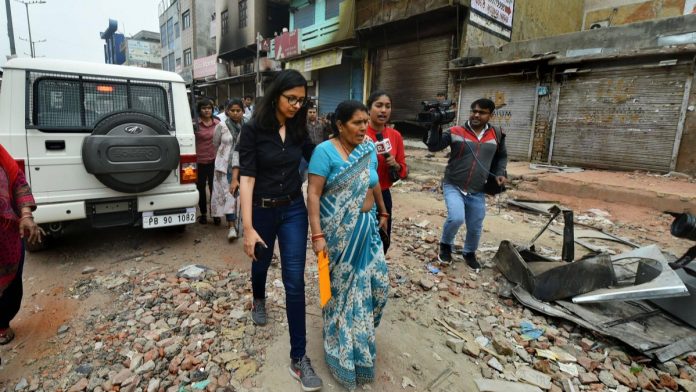 New Delhi, Feb 28: The Delhi Commission for Women (DCW) on Friday directed the Delhi Police to furnish details of crimes reported against women during the violence that hit northeast parts of the national capital starting Sunday afternoon.

In a notice issued to Additional Commissioner of Police (Crime Branch) BK Singh, DCW chief Swati Maliwal sought details of all complaints/PCR calls/FIRs etc — wherein crime against women is made out, or the victim is a woman — received from the violence-affected areas from February 24 till date.

The DCW notice sought details of information on sexual assault/molestation/harassment, if any, received by police from these areas till date.

The commission asked for records regarding the death of women in the violence and details of arrests made so far.

The DCW action comes after it took suo motu cognisance of alleged atrocities on women and girls during the violence.

Maliwal on Thursday met a woman who was nine months pregnant and was seriously injured and her home set afire by a mob. She delivered a healthy baby on Wednesday.

Maliwal along with DCW officials on Thursday visited Chand Bagh in northeast Delhi, among the worst-hit by violence and clashes.

She told the media: “I along with my team will visit all the violence-hit areas (of northeast Delhi) and interact with affected families.”

“We received a lot of complaints from women, and also about children who were shot and killed. We tried to visit the areas on Thursday also but Delhi Police didn”t permit,” Maliwal alleged.

Asked about action against Aam Aadmi Party leader and councillor Tahir Husain, Maliwal asserted that strict action would be taken against all those responsible for the mayhem.