New Delhi: A minor boy who was thrashed to death by a mob on suspicion of being a burglar in northwest Delhi was simply roaming in the area when people caught him and beat him up brutally, the victim”s family members claimed on Saturday.

The police have registered a case and arrested six persons and a minor for thrashing the victim to death in Lal Bagh cluster area.

“He was out of the house and roaming in the area on Thursday night. The accused caught hold of him and thrashed him brutally inside their house and later left his body near the railway tracks,” alleged Rekha (26), the victim”s aunt.

The boy was allegedly beaten to death over suspicion of stealing from a house in the same neighbourhood.

Police said that the incident took place on Thursday night when the boy entered the house to commit burglary but was caught red-handed by the owners and some neighbours who allegedly thrashed him.

The deceased was the eldest among six siblings and his mother had died three years ago. His father Amjad (42) used to work as a plumber and had stopped working since the past three years due to bad health.

His grandmother has a shop in the area and she supports the family.

Refuting the allegation of theft, the victim”s grandmother Nisha (60) said, “if he had been a thief, they would have called the police but why did they kill that minor boy?”

The victim was taken to a nearby hospital where he succumbed to his injuries during treatment.

However, residents of the house where he entered said that he had previously been involved in robberies.

“On the day of the incident when the boy entered our house, my son saw him and tried to catch him, but he rushed to the terrace and jumped from there, following which my son followed him and caught him. In the meantime, the neighbours gathered and people started beating him and later informed the police,” said the wife of the owner of the house.

An FIR under Section 304 (culpable homicide not amounting to murder) was registered at the Adarsh Nagar police station and the owner of the house along with five others and a minor were arrested, police said. 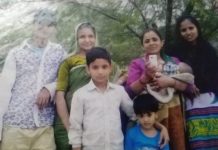