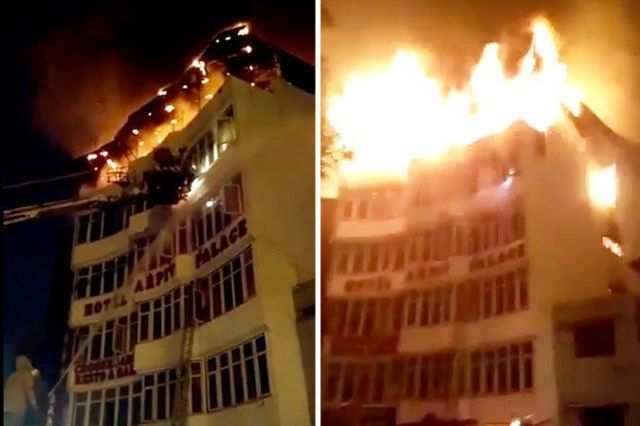 New Delhi : At least 17 people were killed when a major fire engulfed a five-storey hotel in the heart of the Indian capital before dawn on Tuesday, leaving some survivors in critical condition and others dazed and shaken.

The dead included at least two women and a child who could not escape the leaping flames and the thick smoke in Hotel Arpit Palace in the commercial-cum-residential district of Karol Bagh, officials said.

The fire erupted shortly after 4 a.m. Three people jumped from the blazing structure as emergency doors were shut during the night, trapping them inside.

Some 35 people were rescued from the hotel as around two dozen fire tenders joined the battle against the flames, Deputy Commissioner of Police Mandeep Randhawa told IANS. He said while some of them were critical, many others had minor to major burn injuries.

While some dozen people escaped the building themselves after the fire broke out, most of them were trapped when the fire-tenders arrived. Over 50 people, including the bodies of 17, were pulled out by fire officers.

By noon, the fire had been put out and fire-fighters had searched all the rooms and toilets to ensure no one was left trapped.

While the police filed a complaint to probe negligence, the owner of the hotel, Rakesh Goyal, was said to be absconding.

Officials said there were around 70 people, including staff, in the 40-room hotel.

Most victims died of suffocation, G.C. Mishra of Delhi Fire Service said, adding that the toll could up as some of the injured were in critical condition.

The hotel had a basement, a ground floor and four floors. Most of the damage was reported between the second and fourth floors.

A fire officer said the hallways were narrow and electric wiring and wooden panels in stairs were burnt to ashes. The basement and the ground floor were not majorly affected.

It was not clear in which part of the hotel the fire broke out. Mishra said prima facie the blaze appeared to have been caused by short circuit.

“When the fire tenders reached the spot, flames were leaping out of the building. Many people were still fast asleep,” Mishra said.

According to police officer Randhawa, while the hotel had got a no-objection certificate (NOC) for fire safety in December 2017 (valid for three years) for the restaurant and guest house, the cafeteria on the ground floor and the bar were running illegally.

Union Tourism Minister K.J. Alphons said the emergency exits were “very narrow and not built according to specifications”.

“And they were closed at night. According to information we have, those gates are closed at night and a guard sits outside. But we don’t know if the guard was there or not,” he told reporters.

Dazed survivors, who escaped only with the clothes they were in, complained that fire-fighting equipment was not readily available in the hotel and that wooden panels helped the flames to spread rapidly.

“There was no proper fire exit plan,” one man added.

The hotel was reportedly fully occupied and the guests included some foreigners.

It was the worst fire tragedy in Delhi since 59 people died in an inferno in the Uphaar cinema in south Delhi in 1997 and equalled the 17 dead in a fire in a firecracker factory in Bawana in outer Delhi last year.

“Deeply saddened by the loss of lives due to a fire at Karol Bagh. I convey my condolences to the families of those who lost their lives. May the injured recover soon,” he tweeted.

Delhi Minister for Home and Urban Development Satyendar Jain said the building norms had been violated.

Chief Minister Arvind Kejriwal said an inquiry will be launched to find out whether the owner had a valid licence to run the hotel and the bar. He also announced Rs 5 lakh compensation for families of the deceased.