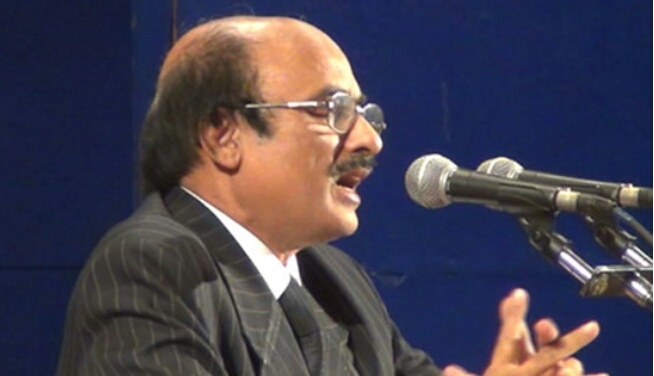 Dr. Jamil has countered the argument of the Theoretical Physicists that man was created as a result of innumerable coincidences rather than due to any preplanned and predestined work by the Creator of the Universe. In a hard-hitting paper, he questions the validity of the argument that billions of coincidences can lead to the emergence of a hugely complex, yet highly coordinated and harmonious universe…..Similar to the final creation of an intelligent being, the social conditions on the earth were also fine-tuned to bring out the Prophets in accordance with the Divine Principle of Causality ultimately leading to the emergence of the Final Prophet.

There is a certain, wondrous beauty in the underlying plan of the universe. “What is the purpose of the creation of man?”, “What is our place in the Universe?” and “was the Universe made and fine-tuned for us?”, these and similar questions have been haunting Physicists and Philosophers for quite some time. It has been a topic of heated debate in Theoretical Physics in last few decades under the title “Anthropic Principle”, several versions of which have been proposed, “Weak” version being the most preferred by the philosophers of the current generation. One of the top universities of Malaysia, The National University of Malaysia (UKM) , in its latest issue of International Journal of Islamic Thought, has published a highly innovative original paper entitled, “Purpose of the Creation of Man: Quran’s True Version of Anthropic Principle” authored by Dr. Javed Jamil, Head of Chair in Islamic Studies & Research, Yenepoya (Deemed to be) University, Mangalore (India). The whole discussion is based on the Theories of Physics regarding creation of universe and man and presents Quran’s True Version of “Anthropic Principle”.

Inline image
Dr. Javed Jamil
Dr. Jamil has countered the argument of the Theoretical Physicists that man was created as a result of innumerable coincidences rather than due to any preplanned and predestined work by the Creator of the Universe. In a hard-hitting paragraph, he questions the validity of the argument that billions of coincidences can lead to the emergence of a hugely complex, yet highly coordinated and harmonious universe. He says:

“If the current theories of the creation of the universe are believed, this is what happened: Immediately after Big Bang, some laws of nature all of a sudden came into force without the presence of any legal expert knowing in advance their subtleness and the implications of their enforcement and without any executive capable of implementing them. These laws initiated the creation of a physical world without any Physicist knowing what was happening and to monitor the progress. There was a very complicated and precise mathematics involved with no mathematician around. Then the chemistry started evolving from Physics with many kinds of molecules forming without any expert of Chemistry. Then after millions and millions of years, Biology started coming into existence as the result of chemical reactions, without any Biologist (Zoologist or Botanist) overseeing the complex system of animal and plant kingdom, their mutual dependence and their dependence on their surroundings. There was huge genetics involved with no one there to even know what Genetics was all about. After around 15 billion years, the first one who would have the intelligence to understand and describe what was going around made his first appearance. Before him, there was nothing in the universe that had any elements capable of thinking, analyzing, planning and enforcing. Man, the First Intelligent Being within the Universe, could do nothing but to learn how to survive for next millions of years till about ten thousand years back when he started developing philosophical and sociological principles. And within last 200 years, that intelligent being developed some instruments which could see the universe in significant details. That intelligent being is still crippled in many ways. There are some handicaps, which can become lesser and lesser cumbersome with time to come. There are others, which are more permanent. That intelligent being is totally dependent on the provisions of the universe to understand it and cannot create any one of its own. He has to depend on light, which runs with a tiny speed of 300000 kms per second, a speed with which he cannot even see the Sun till at least 8 minutes have passed. He cannot see any present, whatever he sees is past, even if it is a tiny fraction of a second past. It can see only the near past of the nearby objects and distant past of distant objects. Now, this intelligent being, which got intelligence to try to understand the subtleties of a hugely complex universe, claims of becoming legal expert, physicist, biologist and sociologist who can tell everything about what happened and what is happening in the universe. Poor little chap!”

Dr. Jami presents “True Version of Anthropic Principle” based on Qur’an. He argues that the debates on creation of the universe and man “have more often than not been influenced by the dominant philosophies of life in the contemporary world, often pushed by the dominant political and economic forces.” “As the last few centuries have been dominated by the atheistic/agnostic philosophies,” he asserts, “Anthropic Principle has been defined in a way suitable for these forces.” Qur’an, the Holy Book of Islam, on the other hand, presents a different version of the questions related to Anthropic Principle, which describes a specific purpose of the creation of man, his relationship with God and the Universe. This has been named “True Anthropic Principle” by Dr. Jamil.

Here are few excerpts from the paper:

…“the philosophical dilemma is that the constants of the Universe on a microscopic (atomic constants), macroscopic (electromagnetic forces) and cosmological levels all appear to be extremely fine-tuned in order for life and intelligence to evolve.”

“Worshipping does not merely mean the ritual of worship; it means total commitment to God’s System of laws, reverence and wholehearted devotion. Anthropic Principles regard man as the desired Product of the Creation. But Qur’an clarifies that

(1) The creation of the universe was not coincidental but was a well-designed predetermined act of God;

(2) God controlled the whole process of creation, creating the planet earth in a unique way, and it ultimately resulted into the creation of the best product, the human being;

(3) The purpose of the creation of the intelligent being was not merely his ability to admire the beauty of the universe but to realize that such a wondrous, well designed, well-articulated, complex and huge, yet perfectly coordinated system of the universe could not have come into existence, developed and survived without an all-knowing and All-Powerful God who understood in advance, in fact planned, every single Law of the Universe and fixed their various constants and implemented these laws and then follow his commands in the worldly life as intelligent and conscious beings rather than the inherent and unconscious way in which all the components of the Universe follow the Divine, the so-called “Laws of Nature”

(4) Similar to the final creation of an intelligent being, the social conditions on the earth were also fine-tuned to bring out the Prophets in accordance with the Divine Principle of Causality ultimately leading to the emergence of the Final Prophet. Man was given freedom but was directed to submit to the System of existence perfected through His Ambassadors and Testaments and govern the Earth in accordance with the Divine commands.

(5) The universe will ultimately cease to function, coming to standstill, not due to gradual process of degeneration but because of the command of God. Then another universe will be created with different sets of Physical laws, and all the human beings that existed on the earth will be resuscitated in a newer form and will face reward or punishment for their deeds in the previous world.”

“Quranic Version of Anthropic Principle provides the only plausible explanation of all that led to the emergence of the Physical as well as Biological Worlds ultimately leading to the Best Product of the Creation, the Intelligent Human Being. This intelligent being has no option but to follow the Social System created by God through His Messengers the same way as the physical components of his body and its surroundings, near and far, follow in precision the Divine Laws of Nature. If the components of the universe had not followed with utmost precision the Divine Laws of Nature, the universe could not have survived. If man does not follow the Divine laws of human life as individuals and as collective existence, it may be called nothing but a pre-determined effort to refute the truth due to either failure in the realization of the Truth under the influence of some misleading theories or due to the vested interests of some individuals or forces. It will lead to, is in fact already moving towards chaos.”

Full paper can be read at the following link: