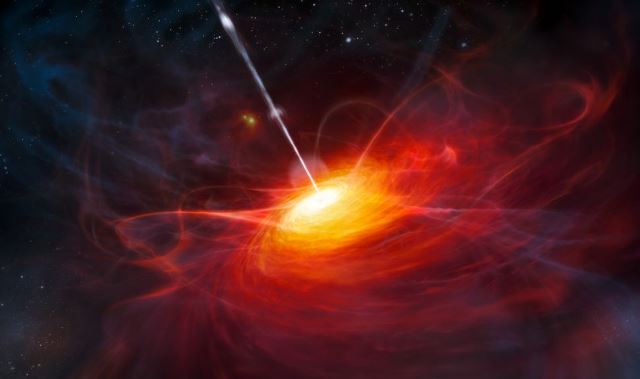 Renowned thinker, writer and Head of Chair in Islamic Studies & Research, Yenepoya University, Mangaluru, Dr. Javed Jamil in his paper , “Exploring the Seven “Heavens” (Sab’a Samaawaat) of Qur’an in Astrophysics” published in  Researchgate and has discussed in detail the possible meaning and location of Qur’anic heavens. He has argued that “the Qur’anic description of the seven heavens and their components comes very close to the description of the astrophysical entities like planet, star, galaxy, cluster, Supercluster, etc… Qur’anic terms like najm, kawaakib, buruj, masabih, shihaab-a[-thaqib, tariq, etc too have corresponding entities in astronomical sciences.”

Dr. Jamil argues that the Universe functions like a state with physical laws, phenomena and forces acting under the rule of the Supreme Sovereign of the Universe, Almighty God. He says:

“It is clear from Qur’an that the universe is not just a space containing individual entities in the form of stars, planets, satellites and numerous other structures but is a well developed and highly organized system governed, sustained and regulated by God. Qur’an talks of the universe not as something having no entity of its own, only containing matter and space, having no dynamic existence in its entirety,  but as one that is acting as a fully grown administrative set-up like that of a country. It describes the universe as “Mulk” or State and God as its “maalik” or “Head”…In terms of the physical organisation, the universe may well be like our world. The World has continents, the continents have countries, countries have states/provinces, states have districts, districts have blocks/cities, blocks/cities have villages/colonies and colonies have homes. The universe, according to Qur’an, is like a State and, from a position on the Earth, has seven functional units, the Cosmic Tiers, called samawaat above the Earth.”

Following are the major points of the paper:

1.      The gravitational field of the Earth including atmosphere forms the First Cosmic Tier. Qur’an  describes all the major components of this tier and their functions. These include the ability of safeguarding the earth from harmful rays, the components of the atmosphere like clouds, rains and how birds fly in the air.

3.      “al-samaai daatil hubuk”(Cosmic Tier of Pathways) used in Quran appears to correspond to the Third Cosmic Tier, our Galaxy, which interestingly is known as Milky Way or the Milky Pathway, which contains numerous star systems like our Solar System. The galaxy our Sun lies in is called the Milky Way or the Galaxy.

4.      ”Sama’an burujan” may indicate the Cluster which has numerous galaxies including Milky Way. The name of our cluster is Local Group.

6.      The Arabic word “tariq” closest to Quasars, the most shining object in the universe situated at a huge distance, which may be part of the sixth Cosmic Tier. There is no name given yet to the collection of super clusters. Quasars are among the brightest and most distant known celestial objects and are crucial to understanding the early universe. Quasars emit energies of millions, billions, or even trillions of electron volts. This energy exceeds the total of the light of all the stars within a galaxy. The brightest objects in the universe, they shine anywhere from 10 to 100,000 times brighter than the Milky Way.

7.      The Seventh Cosmic Tier is the universe as a whole with outermost or the uppermost region containing certain wondrous places. This uppermost part of the Universe may be invisible for now. It may contain some of the offices and the Lauhe Mahfuz (Secured Disc), which may be the centre of all the programs of the Universe.

Dr. Jamil hopes that “in coming decades, hopefully the whole structure of the universe will become better known and we will be in a better position to understand the Qur’anic wonders”.

Author of more than 20 books with masterpieces like “The Devil of Economic Fundamentalism”, “The Essence of the Divine Verses”, “Rediscovering the Universe”. “Islamic Model for Control of AIDS”, “The Killer Sex”, “Muslim Vision of Secular India: Destination & Roadmap” and “Muslims Most Civilised, Yet Not Enough”, Dr. Javed Jamil has already done an unparalleled work in the field of what he calls Applied Islamics. This paper on “Sab’a Samaawaat” has added another feather to his cap.

The full paper can be read at the following link: