New Delhi: Noted pediatrics and activist, Dr. Kafeel Khan, who is a victim of the ‘State oppression’ urged the European Union to support and stand with all the political dissenters and activists who have been put behind bars under draconian laws by the Indian government.

In a letter to the EU, Dr Khan underlined that the government is using its powers to suppress freedom of speech and to silence the voice of dissent.   He also thanked the EU for   raising the human rights issue with India.

Recently, chairperson of the subcommittee on Human Rights in the European Union, Marie Arena has written to the Indian Home Minister Amit Shah on political dissenters and rights violations.

In his letter sent to Arena, Dr Khan, who has been twice jailed by the UP government led by Hindu monk on flimsy charges, deplored the continued attack and intimidation of dissenters. 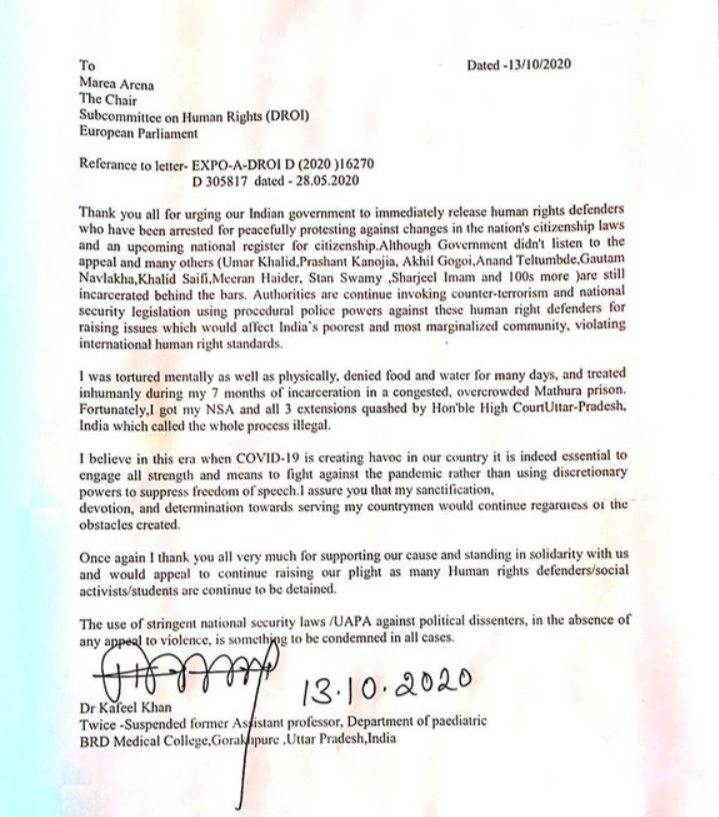 Referring to the arrest of Gogoi, Umar Khalid, Sharjeel Imam, Navlakha and others, he brought to light the horrible  conditions they are subject to in prison.

Dr Khan was jailed on two occasions without any reason.   In August 2017 also he was arrested for medical negligence after cessation of oxygen supply killed more than 60 children at the Baba Raghav Das Medical College in the eastern UP town of Gorakhpur, 270 km northeast of state capital Lucknow. After he spent almost nine months in prison for alleged medical negligence, a government-appointed inquiry absolved him all charges. However, the Yogi Government of UP ordered a fresh probe into Dr Khan.

Then, he was arrested in January from Mumbai by the UP Police, who alleged he made a “provocative speech” at Aligarh Muslim University during anti-Citizenship (Amendment) Act protests. The Aligarh sessions Court granted him bail on February 10 but three days later, the Yogi government promulgated the 40-year-old National Security Act, 1980. He was one of the many peaceful political dissenters arrested during and in the fallout of the anti-CAA/NRC/NPR protests. However, Allahabad High Court  has  quashed NSA  invoked against him by the government.

Dr. Khan described the conditions in prison deplorable and horrible, and alleged that he was tortured and denied food by the jail authorities.

In a letter released from the Mathura prison, Dr Khan had said:

He also stated that in the fight against COVID-19, it is essential to engage as many as people as possible, and not lock them up.