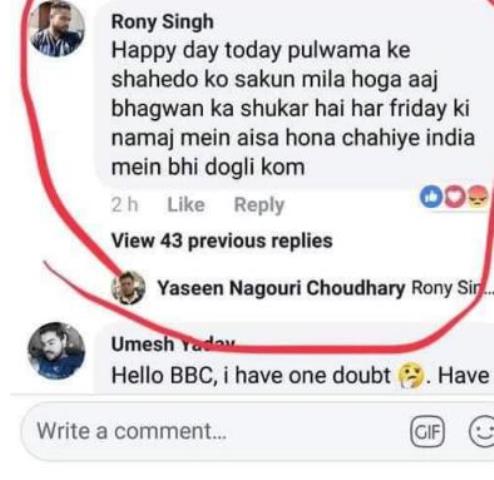 An employee of UAE-based Transguard Group was fired from the company and deported back to  India after he allegedly celebrated the massacre of Muslims in New Zealand and   wanted a Christchurch-like attack in India.

The person had written Facebook comments celebrating the terrorist attack at two mosques in Christchurch, New Zealand, in which 50 people were killed. The person has also been deported from the United Arab Emirates (UAE).

The security company, Transguard, in a statement  confirmed this. The company said that following an internal investigation it found that one of its employees had made inflammatory comments on his personal Facebook account celebrating the deplorable mosque attack in Christchurch, New Zealand.

“This prompted an internal investigation, which uncovered the fact that the individual in question had been posting his views on social media under an assumed name,” the statement said.

Once the security company verified the person’s actual identity, he was apprehended, stripped of his security credentials, terminated his services and handed over to relevant authorities.

Transguard said, “As of this statement, he has been deported by the UAE government.”

The accused was apparently using a fake Facebook profile with the name Rony Singh to write inflammatory posts on the terrorist attack in New Zealand.