The recent demolition of Yak Khana mosque in Amberpet area of Hyderabad jogs the memory of Mufti Mohammed Sayeed.

The people of Kashmir Valley had celebrated the appointment of People’s Democratic Party (PDP) leader as the Home Minister of the country by the VP Singh government at the Centre in 1989.
But it turned out to be the biggest disappointment for the people of the Valley. Security forces inflicted unprecedented atrocities on them with mass arrests, firing on funeral processions and extra-judicial killings and disappearances.

Perhaps the same feeling is palpable in Telagana these days. Home Minister Mohammad Mahmood Ali is proved to be ineffective in protecting the interests of Muslims who form 15% of the population in the State.

As understood among the political analysts, that the appointment of a Muslim to the second most important post in the government was just a ploy to divert the attention of the community from the promise of 12% reservation and avoid the question of not fulfilling the earlier 4% reservation given during the Congress government in the State.
And his appointment worked well. The Muslims cutting across the party lines celebrated the moment and praised Chief Minister K Chandrashekar Rao for his generosity and called him the biggest secular Chief Minister in the country.
However, as the BJP, which was supporting the VP Singh government from outside, had called the appointment of Mufti Mohammed a political gimmick, in the same way Telangana Home Minister Mahmood Ali turned out to be only a show boy of the ruling Telangana Rashtra Samiti (TRS) president and Chief Minister K Chandrashekar Rao. 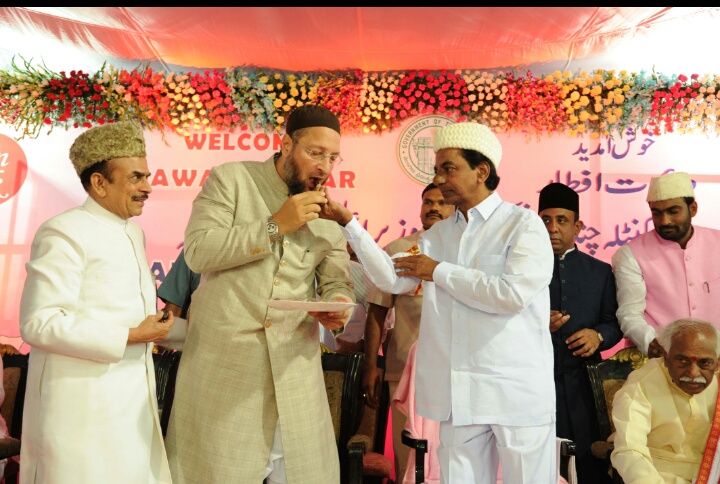 Recently, a mosque was demolished in the dark of the night by the Greater Hyderabad Municipal Corporation (GHMC) located in the heart of the city for the road widening purpose.

Though it was a small mosque, its demolition snowballed into a big issue, and questions are being raised on the intention of the Chief Minister and the role not only of Home Minister Mahmood Ali, the Waqf Board but also of dominant Muslim party in Hyderabad, Majlis Ittehadul Muslimeen (MIM).
When there were Assembly and Parliament elections, both Mahmood Ali and MIM president and MP Asaduddin Owaisi were busy in mobilising the Muslims to vote for the TRS en bloc. They had cited the schemes that were introduced by the TRS government for Muslims like Shaadi Mubarak, opening of some schools and organising yearly Iftar party and distributing Rs 400 worth clothes and Rs 1,000 to Imams of mosques on the occasion of Ramzan.
However, both the leaders deliberately forgot to mention the fate of 12 % reservation to Muslims in education and jobs as promised by the State government in the first term. Even they did not tell people what happened to the 4% reservation that was given to the community by the preceding Congress government in the State.

Obviously, both were doing their duty. Mahmood Ali, who could not even win his own seat in the Assembly elections, was at mercy of TRS chief K Chandrashekar Rao who had been using him as the Muslim face of the party. Moreover, he was thankful to him for appointing him the Deputy Chief Minister in the last government.

On the other hand, after jumping off the sinking ship of the Congress in the State, MIM needed an alliance with the TRS which was the dominant party in the new State of Telangana. Therefore, to protect their seven Assembly seats and securing one Lok Sabha seat, the MIM leaders particularly its president Asaduddin Owaisi forgave all sins of the State government. Even he forgave the gunning down of five hand-cuffed Muslim youths by the police in Alair town of Yadadri Bhuvanagiri district in 2015 when they were on the way to court for the final hearing. It was believed that they would be acquitted from all charges of terrorism and soon be released from jail.

At the same time, when the Telangana Movement was at its peak many promises were made to the Muslims of the State. When the time of distribution of fruits had come they were forgotten.
When Chief Minister Chandrashekar Rao announced raising the Muslim reservation from 4% to 12%, it was evident that he did not mean so since the move hinged on the approval of the BJP government at the Centre which would never oblige the State to antagonize its core Hindu vote bank.
When Yak Khana mosque was demolished in the heart of Hyderabad city, people searched for the leaders who had approached them during the Assembly and Parliament elections. But, to their dismay, they were nowhere to be seen. The common Muslims and locality-level leaders were there to protest the blatant conspiracy of the Corporation which has a Muslim Deputy Mayor, Baba Fasihuddin.

When the youths tried to erect makeshift shade on the premises of the demolished mosque, the police of Mahmood Ali lathicharged them and supported the stone pelters belonging to the ruling TRS party and Hindu Vahini who opposed the reconstruction of the Masjid. Several Muslim youths receive grievous head injuries in the stone pelting. Police booked cases and arrested Muslim youths only.

On the other hand, MIM president Assaduddin Owaisi, who lays claims on every Muslim vote in the country, as usual, kept mum on the issue and went out of station as he does when such incidents take place or going to happen. Even he failed to react on social media.
In a similar case, in Jagtial district, the Muslim mango farmers who used to offer namaz at the fruit market in the city during the mango season, all of sudden authorities clamped ban on their prayers. They protested against the district authorities but nothing happened.
In the same way, a youth from UP was tortured to death by the police in custody in Warangal district a few days ago. Neither Home Minister nor MIM president Asaduddin Owaisi went to console the pregnant wife of the deceased. Thus, the victim’s family was neither given compensation nor the accused policemen were punished.

The question arises what is the use of having a Muslim Home Minister when he cannot protect his community from police atrocities? When the municipal corporation demolishes a mosque and the Muslim Deputy Mayor does not react, what is the use of holding such post? And when five Muslim innocent youths are killed in police custody and sometimes they are handed over to the Gujarat police on flimsy charges (as happened during the previous Congress government) what is the use of having an alliance with the ruling party?

In Uttar Pradesh, highest number of Muslim candidates were ever elected to the Assembly in 2012 Assembly polls and several of them were given plump posts in Akhilesh Yadav-led Samajwadi government.

But these 64 MLAs did nothing to save the Muslims of Muzaffargarh district which was burning in flames of communal riots in 2013. Rather the vocal Muslim face of Samajwadi Party, Azam Khan, kept mum. Then, what is the use of such MLAs who could not protect their community whose women were raped and their property was grabbed during the riots?

In Telangana, after Assembly and Parliament elections, local bodies’ polls are being held and then municipal corporation polls will follow.
But the incidents like the demolition of Yak Khana mosque have raised question on the efficacy of such exercises. In fact, they have lost their importance to the Muslims of the State. In their words, they are now weary of this stupid, meaningless and constantly repeated farce. These rituals of democracy bring no spring in their lives and they continue to suffer as they had been earlier.