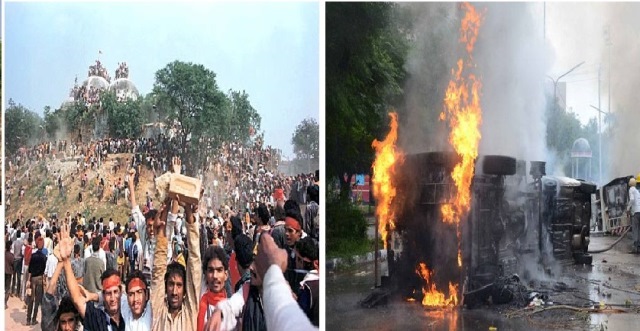 Is it coincidence that wherever we have BJP governments mobs rule/destroy unhindered?

In December 1992 despite restrictions imposed by The Supreme Court and UP BJP governments undertakings to Supreme Court and Government of India that peace would be maintained in Ayodhya during ‘kar seva’,  thousands were allowed to gather at Ayodhya and India witnessed demolition of a 400 hundred year old mosque. This criminal act, even as 3,000 paramilitary forces looked mutely on, deeply fractured Indian society, causing a schism even the worst enemies of India could not accomplish.

In 2002 in Gujarat similar, sinister pattern was repeated. Mobs led by Hindutva criminal organizations were allowed free reign. The result? A genocidal carnage of Muslims. What happened in Gujarat in 2002 was editorially commented by a leading English daily, Hindustan Times (March 21, 2002) in the following words:

“Daughters were gang raped in front of their fathers and then their heads bashed in. their fathers were doused with petrol and set on fire.  Their property was looted. Their businesses were destroyed. And the police stood by and did nothing.”

In February 2016, the violence allowed to spill over in Haryana was another example of this trait of BJP governance. Haryana turned into a war zone as caste wars were allowed free reign. The mobs were allowed to burn public property and Haryana simmered –held to ransom by the rule of the mob- for 11-12 days. The Army had to be called which fired on its own people, 30 people were killed in the violence, property worth of thousands of crores of rupees was looted/burnt and innocent Indian women were violated.

It has happened again in Haryana. The supporters of one baba Ram Rahim when found guilty of raping two sadhvis by the CBI court went on a bloody rampage. The RSS/BJP baba friendly government despite restrictions on gatherings allowed lakhs of baba’s supporters at Panchkula and what Nation witnessed is shocking. Railway stations, government offices, bus stands, public/private vehicles and infrastructure were burnt/looted not only in Haryana but also adjacent Punjab. It was clear that if Punjab & Haryana High Court had not intervened, the sponsored mobs would have lynched the CBI judge and razed the CBI court building.

The media became a special target of the mob violence (such large scale violence against media happened after demolition of mosque at Ayodhya on December 6, 1992 too) in which large number of correspondents were maimed and press vehicles destroyed.

RSS/BJP rulers want anarchy to prevail so nobody questions them about poverty, unemployment, price-rise and violence. They believe that by creating anarchy the can establish Hindutva State. In fact RSS/BJP rulers should also be charged for abatement of violence and destruction of public property.

It is intriguing that brand ambassador of Haryana another baba, Ramdev was missing when Haryana burnt in February 2016, and is missing now also. He should have been around with his Yoga gimmicks for establishing peace in the region.