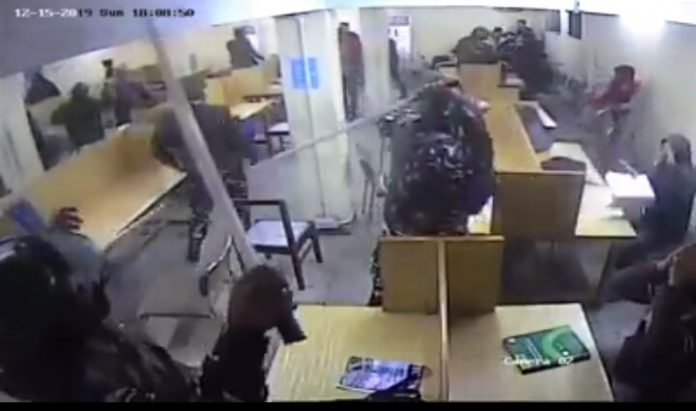 New Delhi: A horrifying CCTV footage was released by the Jamia Coordination Committee on Saturday showing Delhi Police personnel thrashing students with sticks in the library.

The 49-second clip has exposed  the brutality of  Delhi  Police  committed on Jamia students two month back.

In the video policemen are seen   badly thrashing the students who were studying in the library.

The police brutality unleashed against Jamia students was   captured by CCTV installed inside Jamia Library.

The video shows several policemen thrashing students at a reading hall of Delhi’s Jamia Millia University on 15th December – the day violence broke out at the campus after a protest march against the Citizenship (Amendment) Act or CAA.

The videos which has gone viral on social media shows students sitting at university’s Old Reading Hall (M Phil Section). A man sitting at a desk hides under a table before cops enter the room; another man is seen rushing around.

Several policemen in riot gear suddenly barge into the room, severely baton-charge students as they look for cover. Some students run out as cops continue to thrash them.

Violence broke at Jamia Millia University in Delhi on December 15 after a protest march by the university’s students against the CAA ended in a pitched battle with the police, vandalism and torching of vehicles. The police, which used batons and tear gas to contain the violence, later barged into the university and detained around 100 students. A student, injured during the clashes, lost sight in his left eye.