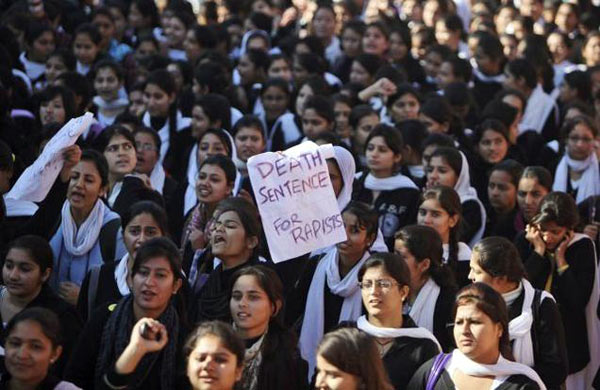 New Delhi, Dec 27: Hundreds of protesters, mostly young people, came out on the streets Thursday after two days of relative peace, demanding strict rape laws, even as the gang-rape victim was in “an extremely critical condition” in a Singapore hospital.

The 23-year-old victim was admitted to the Mount Elizabeth Hospital in Singapore early Thursday after her condition deteriorated in the Safdarjung Hospital here. Hospital chief executive Kelvin Loh said in a statement in the evening that the young woman remains in “an extremely critical condition”.

“Prior to her arrival, she has already undergone three abdominal surgeries and experienced a cardiac arrest in India,” said Loh.

“A multi-disciplinary team of specialists is taking care of her and doing everything possible to stabilise her condition.”

The young woman was admitted in Safdarjung Hospital since Dec 16. She was flown out late Wednesday night to Singapore accompanied by her parents and a team of doctors from India.

Hundreds of protesters, mostly women, held a sit-in demonstration in the capital to demand better safety and security for women in the country.

The protesters had started their march from Nizamuddin in south Delhi and were headed towards India Gate, the venue of massive protests and violence on Sunday, but were stopped on way by policemen.

The protesters, under the banner of ‘Justice for Women Now’ – a forum of women activists and NGOs – staged a sit-in near India Gate. They raised slogans such as “Ignore my lipstick and listen to what I’m telling you”, “Justice for all rape survivors”, “Hanging is not a solution to woman assault” and “Remove Delhi Police commissioner”.

Besides demanding justice for the rape victim, the angry crowd also demanded that all rape victims be given justice within 100 days.

They also demanded that the government should call a special session of parliament to discuss stringent rape laws.

The national capital has been witnessing anti-rape protests at India Gate after the 23-year-old trainee physiotherapist was tortured and raped in a moving bus Dec 16.

The controversy over the death of a policeman following Sunday’s violent protests took a fresh turn Thursday with another “witness” turning up, with a story backing the Delhi Police claim of injuries to the policeman.

The three, who said they were witness to constable Subhash Chand Tomar collapsing, were questioned by the crime branch of Delhi Police Thursday.

Yogendra Tomar, a journalism student, and Pauline, a witness in her 20s, have both said the constable collapsed while chasing the crowd and that he was not beaten or trampled upon by the protesters.

The third witness, Salim Alvi, 31, claimed that Tomar was beaten up by protesters.

The case of the constable’s death was handed over to crime branch Wednesday.

The post-mortem report of the policeman said he had multiple injuries on his neck and chest.

T.S. Sidhu, medical superintendent at the Ram Manohar Lohia Hospital, where Tomar died, had said Wednesday that the constable had “no major external injury marks except for some cuts on his right knee and bruises on his chest” and “was brought here in a total collapsed stage”.

Delhi Police have asked the hospital to provide the medical reports based on which Sidhu said Tomar had no external injuries.

Police are also collecting video footage from news channels to establish the sequence of events during the protest on Dec 23.