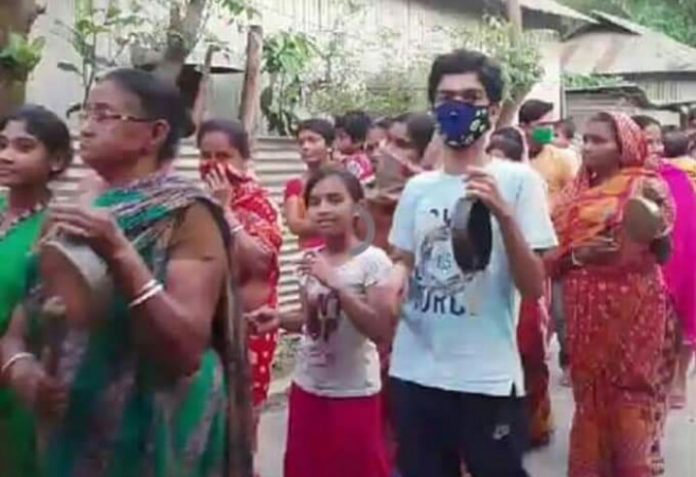 In Visual Communication it is said the reality speaks through the images. On Sunday March 22, 2020 at 5 PM, people in India turned out in good numbers at their balcony, entrance of the house and on terrace to make noise by beating the tin, ringing the bell, blowing the conch and many making sound by hand clap. All apparently were doing this due to the astrological belief that if collective noises are made all over the country at a particular time, then it may ward of the killer corona virus.

The TV images that were beamed in India prominently showed Hindu religious icons like, Uttar Pradesh Chief Minister Adityanath Yogi, Yoga Guru Baba Ramdev and other people who looked like Hindus. All of them were seen engrossed in doing some Hindu religious rituals no way looked like cheering for the para medics and others who are fighting the Corona virus in the country.

The images showed up on the TV screens clearly show people doing some religious chorus then why did the narrative change that they were in a ‘buck up’ exercise. This is because the images could not be hidden from the public view and what could easily twist are the motives attached.

It seems more probable that the cheer up reason was invented much later then the announcement of the synchronicity act of religious exercise but when superstitions glared to abnormal heights, rationale motive was invented to hoodwink the views living elsewhere in the world.

Nonetheless secular motive was exposed because in the images those indulged in noise making exercise were Brahmis or their look alike as the dominant participants. The images of CM Adityanath and  Baba Ramdev and other saffron colored people and their acts tell the story in its semiotic flavor.

The other image that was recently flashed in the media was where scores of people mostly Hindu men and women were seen drinking cow urine apparently to keep them safe from the Corona virus. This obnoxious image of the Cow Urine drinking party is still haunting many minds and giving nauseating feelings.

What is scientific rationale is behind the drinking of animal waste. Whose brainchild is behind this idea that drinking animal excrement can ward off biologically created virus? What mind set do these people have who believe the virus can stay away by drinking animal secretion? Is Snatam Dharma so irrational superstitious and insane religious or these folks are enemy of Hinduism and hell bent to disrepute to this egalitarian religion?

All these visual images tell a lot about the changes that are taking place in India at the ground level.  The visual text analysis makes it abundantly clear that the BJP government is progressing towards its goal of Hindu Rashtra and what it has been able to achieve in just six years or so is quite a feat. In the same breath it can be said that the Congress and others who ruled the country for over seventy years or so could not lay the foundation of scientific temper to hold this country together.

This visual analysis clear tells that the country is drifting towards a theocratic state from the secular, scientific and rationale nation as it was envisaged by the founding fathers of this nation.  These images convey this message very loud and clear.

In the end, I leave it to the readers’ to make their judgments with the wisdom at their command as to which direction are we heading even as we are all are united in the fight to defeat the common enemy and that’s Corona virus.