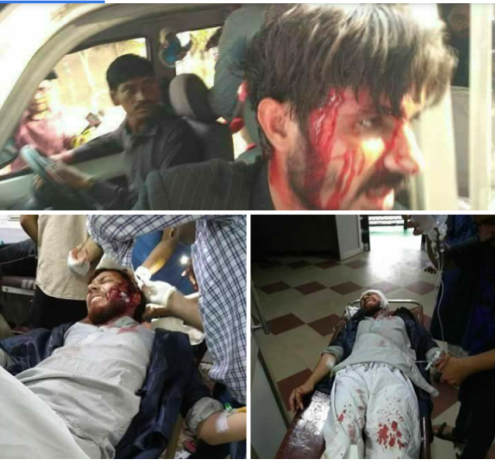 Washington DC. : Association of Indian Muslims of America (AIM) has condemned the attack of police on students of Aligarh Muslim University (AMU) who were peacefully protesting against Hindutva goons who barged into the campus with arms  and tried destroy the peaceful environment of the university.

The students were peacefully protesting against an earlier violent trespassing by a large group of armed extremist Hindus by the name Hindu Vahini, who had earlier broken into the university campus, apparently on the ruse of removing a photograph of MA Jinnah, the founder of Pakistan, from one of the university buildings.

It is reported that the police contingent escorted the Hindu Vahini group to the main gate of the university, and when AMU students protested against their illegal incursion in the campus, the policemen beat up the students violently   At the same time police authorities are continuing to refuse to file cases against the extremist Hindu Vahini volunteers for illegal violent trespassing.

Kaleem Kawaja, the Executive Director of the Association of Indian Muslims of America (AIM) stated that the said portrait of Mr Jinnah was installed in a building of the AMU Students Union at the AMU campus in 1938 in recognition of his becoming a member of the AMU Students Union at that time.  Indeed many photographs of Mr Jinnah with other prominent freedom fighters of that era are, since long being displayed in the main building of the Indian parliament, and the High Court in Mumbai.  In late 1948 after Mr Jinnah’s death, the Indian Constituent Assembly, the forerunner of the Indian parliament, passed a condolence motion and sent it to the Government of Pakistan. The significance of Mr Jinnah’s photograph in an AMU building is a similar historical phenomenon that should not be misconstrued otherwise.

Kaleem Kawaja, speaking for a large number of Indian-Americans who live in North America said that they are very aggrieved at the outrageous and violent behaviour of the Indian police in abetting the illegal action of a bunch of Hindu extremists against the century old AMU, and in doing violence to the peaceful AMU students.  We categorically condemn this action of the Indian police, and request the government of India to take appropriate action against the erring policemen and extremist Hindu activists.