New York : Inspired by ‘Israel model’ of dealing with Palestinians Indian diplomat in US has suggested India to implement the same method while dealing with Kashmiris in India.

India’s Consul General in New York Sandeep Chakravorty told that India could follow the Israeli model in rehabilitating Kashmiri Pandit who left the Valley due to violence in the 1970s.

Speaking at a private event, the top Indian diplomat in the US said that the Kashmiri Pandits could return to the Valley soon because “if the Israeli people can do it, we can also do it.”

During a private event in the city that was attended by some members of the Kashmiri Pandit diaspora, India’s Consul General in New York Sandeep Chakravorty spoke about the Abrogation of Article 370.

“I don’t know why we don’t follow it. It has happened in the Middle East, you have to look, if the Israeli people can do it. We can also do it,” the Indian diplomat said in remarks that were recorded and then uploaded on social media.

“None of us can imagine an India without Kashmir,” he said.

He further said that he believes that in his lifetime, “we will have our land back, our people have to go back. Give us some time, the government has done what it has done.” 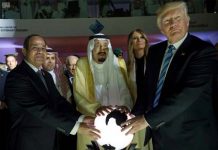 Saudi rulers behind ‘Israel model’ for Muslims in the world