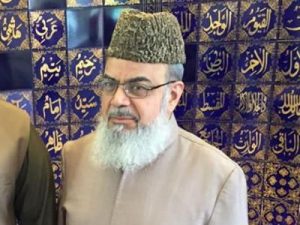 London, Jan 25 : An Indian-origin Muslim cleric has been awarded an honorary doctorate by University of Leicester in Britain in recognition of his commendable work for the local community, it was reported on Monday.

Muhammad Shahid Raza, head Imam at the Leicester Central Mosque, received the honorary degree from university chancellor Lord Grocott at a ceremony at De Montfort Hall before a global audience of graduating students and their families, www.leicestermercury.co.uk reported.

Raza was born in Bihar and studied in Moradabad, Agra and Meerut before moving to Britain. He became head Imam at the Islamic Centre in Leicester in 1978.

Raza has spent his life working with Muslim community groups and on intra-faith relations, both nationally and internationally.

“I have always strived to instill in my students a desire to achieve academically and integrate themselves as valuable members and contributors to society,” Raza was quoted as saying.

“For this reason, I reflect on this award fondly and I hope it will further inspire the young Muslims of Leicester,” he added.

In Leicester, Raza has established a tradition of inter-faith dialogue by welcoming to the centre many groups and individuals from different faith communities, the report said.

Raza also helped form the Federation of Mosques in the city and is currently the executive secretary and registrar of The Muslim Law (Sharia) Council UK.

He was awarded an Order of the British Empire (OBE) in the 2008 New Year’s Honours list for services to the Muslim community in Leicester.

“Raza has been a hugely influential figure in our city and county as a leading Muslim cleric and teacher over a period approaching 40 years. In terms of Interfaith dialogue over that period, again his influence has been profound,” Stephen Foster, coordinating chaplain to the university, was quoted as saying.—IANS