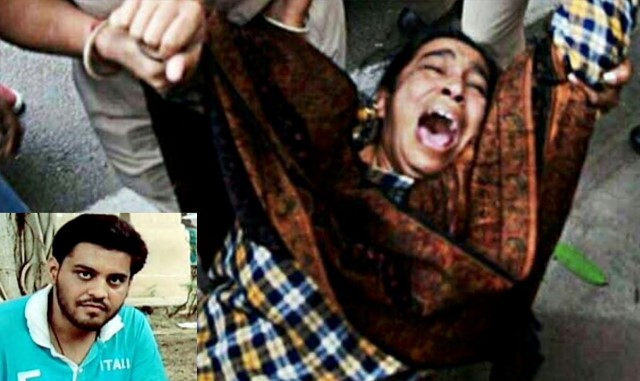 The picture of a wailing Muslim woman being abhorrently dragged by the lackeys of Modi  is that of Fatma Nafees the unfortunate mother of Najeeb. Najeeb like every other young Muslim of India was brainwashed into believing that the (fascist) government has a benevolent plan for his education, career or employment. The poor boy like all others had forgotten that he was a Muslim in India.

The biggest question is, what makes the Muslims forget the millions of their own ancestors, who despite being brave freedom fighters, have been systematically butchered on the soil of India since 1947? Who erased from their memory the picture of the trains full of Muslim corpse massacred, dismembered  and charred; the gutted Muslim villages of Gurdaspur, Bihar and Bengal; the broken bones and cut pieces of Ehsan Jafri; the fearful, tearful face of Qutubuddin Ansari of Gujarat ; the killing fields of Bhagalpur; the winter camps of refugees driven out of Muzaffar Nagar, the brutal police shooting of young Muslims in Batla House (Jamia Nagar, Delhi) ; and the everyday free hunting of Muslims in Kashmir men, women and children pelleted, killed , raped and dumped.

The tragic story of Najeeb being kidnapped from India’s premier educational institute JNU (Jawaharlal Nehru University) by the mercenaries of the ruling fascists and CBI’s blatant retraction of his search on a completely illegitimate ground illustrates the vicious design of the government to deal with the 200 million odd Muslims of India.

“Desperate for subsistence “can now best define the lives of Muslims in a land their forefathers had so valiantly fought to get free from the British occupiers. Why have, these same Muslims whose forefathers chose to die rather than to surrender before the British tyrants nearing a submission in the face of an equally tyrannical Sanghis , the ruling dispensation of today’s India ?

What has gone wrong with the Muslim psyche in India?

In this part of my article I will explain to you how a systematic mental subversion on the part of the post-independence governments of India has forced the common sense out of the ill feted Muslim minority to which the poor Najeeb belongs. The most evident proof is that you’ll still find Muslim students lining up to get admission in  JNU despite the horrible example they have made out of their brother ( or may be not) Najeeb. Let alone deprecating the abductors the hapless community has chosen to befriend them. This is exactly as unfaithful as the Saudi women happily driving their cars while Loujain al-Hathloul the activist who fought for their freedom to drive is languishing in jail.

We need an international investigation, perhaps overseen by the United Nations, of what happened to Najeeb but the Indian Muslims are so pathetic that they can’t unanimously demand even a Supreme Court monitored  SIT to find their abducted boy whose mother is seen crying at every door of power.  And each political leader simply played her for a sucker. Academic starvation brings young Muslims to the gates of schools, colleges and universities where they fall through the cracks of communal hatred, abduction, rapes and devastating brainwashing. The campuses have been poisoned by the Sanghi thugs who man the offices of the vice chancellor to the peon these days. Let alone academic or research freedom, even the right to question or debate has also been confiscated. All that one can talk about is the Sanghi ideology of hatred and division that is served by the RSS mouth pieces in these institutions. Any one refusing to give in will face a severe backlash like Najeeb.

Educational institutions are easy targets as they are mostly under the iron grip of the fascist govt. There is also a common miscomprehension about the autonomy of the minority designated institutions of India. Let alone the schools, central universities like Aligarh Muslim University (AMU) and its vice chancellor are equally subservient to Sangh Parivar and there is no freedom even to hang a picture of choice on the walls of these minority institutions. The lure (although unreal)  of a career as a servant in the private or the public sector forces the Muslims of India to join the RSS camps that run these schools, colleges and universities and consequently end up being abducted like Najeeb, murdered like Mohsin Sheikh, or raped like Asifa Bano.

This is the Muslims’ fait accompli in Modi’s India. Investigating agencies like CBI are parrots in the cage and speak the language of their hyper communal masters in the government. Judiciary has to bank on the CBI reports and decide on the underprivileged Muslims bothering the least about the injustice being done. What surprises us the most is the Muslims’ business as usual even after burying their martyrs from Kashmir to Kanyakumari? There is no sign of concern let alone that of agitation. The situation can best be explained by the example of those sheep that choose their own butcher and continue to graze until each one of them are slaughtered one by one. The government and the media will continue to exculpate the butcher and incriminate the sheep. For how long will the 200 million sheep continue to sing  encomium despite their honor disparaged, their lands usurped, their women raped, their community demonized, their religion interfered with, their faith breached, their youth incarcerated, their old humiliated, their masajid demolished, their economy sanctioned, their existence terrorized ? When will they get their stolen Najeeb back?

(Views expressed in the article are personal)