The story that is fed through media that a Sikh officer was caught ferrying three terrorists out of the Kashmir valley, with alleged intention to disturb the Republic Day celebrations in Delhi has something deeper into it than the arrest of a DSP Davinder Singh from Union Teritory of  Jammu & Kashmir.

Let’s read the story once again; “Davinder Singh, posted as the deputy superintendent of police, was arrested along with Naveed Babu, self-styled district commander of banned Hizbul Mujahideen, a new recruit Atif and an advocate Irfan Mir. The four were caught with arms and ammunition while they were travelling in a car near Qazigund, on the national highway in South Kashmir.”

This childish story when read in cold print or coming from the mouth of news anchors on Television evokes grin on the face and laughter of the lips because it cannot without a pinch of salt.

How come, overnight a mid-ranking police officer who played a high profile in the conflict zone in J&K can become a black sheep and so childishly get arrested.

The first reaction is it is a story being deliberately planted by the security agencies as ‘cover-up’ to some goof up in the conflict zone of J&K and whose antecedents cannot be independently verified.

Since Davinder Singh arrest is hogging the lime light in the media, it is essential to go into the merits of this case and come out with some conjectures that our mind can digest?

Essentially, there are five theories that are making rounds in Davinder Singh’s arrest case. The first is Davinder Singh was the cop who had links with terrorists and the state police intercepted his car on the national highway and arrested him red handed along with three terrorists.

This story instead of appealing to human senses raises many questions and triggers our mind like busy bees to probe deeper varsity of this planted scoop.

How come such a high profile cop who a few days ago was seen near the aircraft that disembarked foreign diplomats to Srinagar to assess the situation in valley, can be arrested a few days later that too caught red handed in an antinational act.

This story wants to convey that Davinder Singh was a double agent who was working in J&K police but was hand in gloves with the terrorists.

Now in a conflict zone like Kashmir, where even every civilian’s activity is marked by security sleuths, how come a uniformed police officer be allowed to operate without any surveillance?

Certainly this baloney story deserves to be archived for journalism students to cite as examples in their term papers of concocted and peddled stories.

The second theory is Davinder Singh was a corrupt police officer who can do anything for money. He was double and triple agent and he worked for money, irrespective of the source of funding.

This theory by default makes Davinder Singh an entrepreneur cop who was making best use of the conflict situation and in the process making money.

This story looks blatantly untrue when some facts are issued by the source to support the entrepreneur cop theory. This entrepreneur theory fails the test of logic as it raises few fundamental questions; how a police officer with dubious credentials is allowed to function in such a high profile way that too in an extremely sensitive zone of conflict.

The third theory that is making rounds is that Davinder Singh was working for some intelligence agency and has become victim of inter services rivalries between different intelligence agencies operating in the Union Territory.

This looks more plausible theory. Remember, the words of Davinder Singh when he was questioned by the sleuths. He said, ‘this is a game and asked them do not spoil this game.’

This means that he was on a mission for some intelligence agency maybe secret police, administrative agencies, RAW, IB, bureaucracy etc. that was not coordinated well and therefore he was taken as suspect.

Such situation is common in a conflict situation where many state actors are work not in tandem with each other but at cross purposes, with an intention to score some brownie points.

This theory looks more palatable theory than the first two because it satisfies the logic of human mind. But then besides it there are two other theories that looks equally enticing.

The fourth theory is that Davinder Singh was a pawn in government’s deep state operations. A deep state is a form of clandestine government’s operation made up of hidden or covert networks of power operations independently working in pursuit of some hidden agenda and goal.

The deep state actors are parallel operatives who can operate in opposition to the publically stated agenda of the government that may involve, obstructing, resisting, and subverting stated government policies and directives.

The government uses its agents in the pursuit of its hidden objectives or goals. The agents get into such acts for job security, enhanced power and authority and gain favors from the government.

In Davinder Singh case, the hidden objective was to bring some militants to the national capital through state channel and then plant a story of government foiling a terrorist attack on eve of Republic day parade.

The last theory has religious overtones and is much sensitive because it sets cat against the pigeon. Davinder Singh was picked up because he was a Sikh by faith. As we know that Sikh community in J&K has sided with the overwhelming Kashmiri sentiments against the abrogation of Article 370.

And this has irked the Central government that hatched up a conspiracy to trap Davinder Singh to set an example if Sikhs indulge in acts of defiance against the ruling government policies, a similar fate may await them.

The latest news about Davinder Singh’s story is that the National Investigation Agency (NIA) has received orders from the Union Home Ministry to re-register a case against Davinder Singh and alleged terrorists and has started the investigation.

Well such probes are just like this story, which will always be one sided and never bring the real truth to the public domain. This is more some when there is some tacit involvement of the intelligence agencies or the central government in such cases.

The conclusion is Davinder Singh has become the sacrificial lamb put behind bars to cover up someone’s faults. 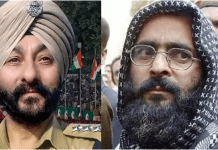 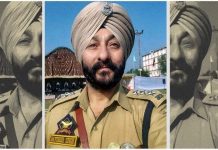