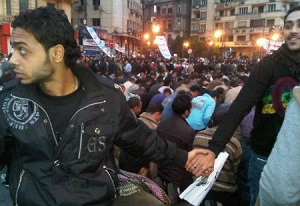 New Delhi: Maulana Syed Jalaluddin Umari, Ameer (National President) of Jamaat-e-Islami Hind, has strongly condemned the killings of members of Ikhwanul Muslimoon (Muslim Brotherhood) by the Egyptian army and terming the killings as extremely immoral and inhuman he demanded the army to stop it immediately.

According to media reports, around three hundred people were massacred in the early morning on Saturday by the Egyptian army which last month sacked the elected constitutional government of President Dr. Mohammad Morsi. Around 6000 people were also wounded in the brutal acts of the army. According to the reports, Cairo University and Jamia Azhar are being evacuated by the Army which looks hell-bent on unleashing brutalities on the supporters of President Morsi. The wounded people are not being provided medicines also.

In a media statement on Sunday, Ameer-e Jamaat said the Egyptian Army had no legal, constitutional and moral right to stage coup against and sack the elected government of Dr. Moris. Therefore, the present government in Egypt is completely illegal but to justify it the army is opening fire on the peaceful protest of Ikhwan and thus is committing heinous crime.

Maulana Umari reminded the Egyptian army that the ancient and modern history of Egypt stands witness to the fact that oppressors on this piece of land have never got success, rather humiliation and shame became their fate. The present army of the Egypt should take lessons from this reality and stop its crimes and seek pardon from Almighty Allah and undo their illegal act by ending its revolt against and restoring the elected government of Dr. Morsi.

Ameer-e Jamaat also appealed to all governments of the world and peace-loving people to take all possible steps to keep the Egyptian army from killing its own countrymen so that democratic values are restored there and atmosphere of peace and justice established.