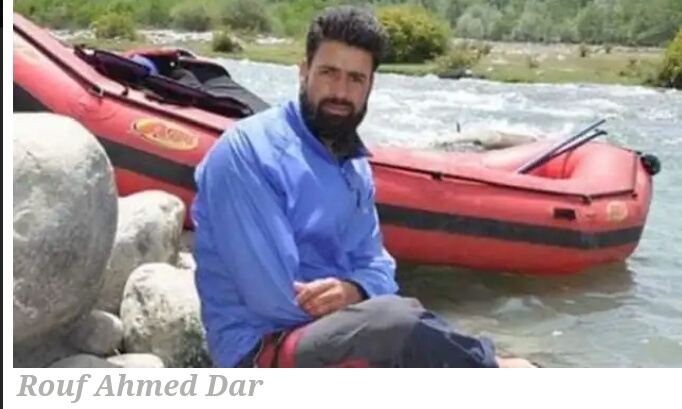 In a heart sinking incident a Kashmiri tourist guide lost his life after saving five tourists, including two foreigners, from Lidder river at the famous Pahalgam resort.

A raft capsized at rafting point in Mawoora Pahalgam in the south Kashmir district on Friday after it was caught in sudden gusty winds and all passengers onboard fell in the Lidder river, the officials said.
Rouf Ahmed Dar managed to save all the passengers but went missing in the aftermath.

“Without caring for his own safety he rescued all the tourists from the fast-flowing water of the river, but lost his life,” said a local.

The officials said the body of the brave tourist guide was retrieved from the river on Saturday morning near Bhawani bridge and after completion of medico-legal formalities, it was handed over to his relatives.

The guide, who had a diploma in rafting, has been hailed as a brave heart. The Jammu and Kashmir Governor Satyapal Malik has hailed the brave heart guide as a real-life hero and announced an ex-gratia of Rs 5 lakh to the kin of the victim. The Kashmir Divisional Commissioner has also announced a compensation of Rs 2 lakh for Rouf’s family.

The victim got married few years ago and is survived by parents, wife and two siblings.  Rouf was pursuing a masters degree in political science from Indira Gandhi National Open University (IGNOU). He had also done his B.A and B.Ed.