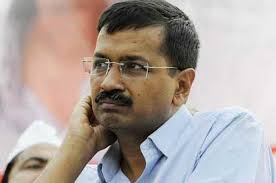 New Delhi, Jan 28 Delhi Chief Minister Arvind Kejriwal on Tuesday accused the BJP of taking “revenge” from the poor in the city and urged the saffron party to stop such actions.

His tweet came in response to a news which says an auto driver was challaned for Rs 10,000 for writing “I Love Kejriwal” on his auto.

Responding to the news, Kejriwal tweeted in Hindi: “BJP is using its police for wrong challans of poor auto drivers. The only mistake of the auto driver was that he had written “I love kejriwal”. Such maliciousness against the poor is not right. I appeal to the BJP to stop taking revenge from the poor.”

The ”I Love Kejriwal” campaign was started by the auto drivers in Delhi.

According to AAP, they were writing ”I love Kejriwal” on the autos “to express their allegiance for the chief minister”.