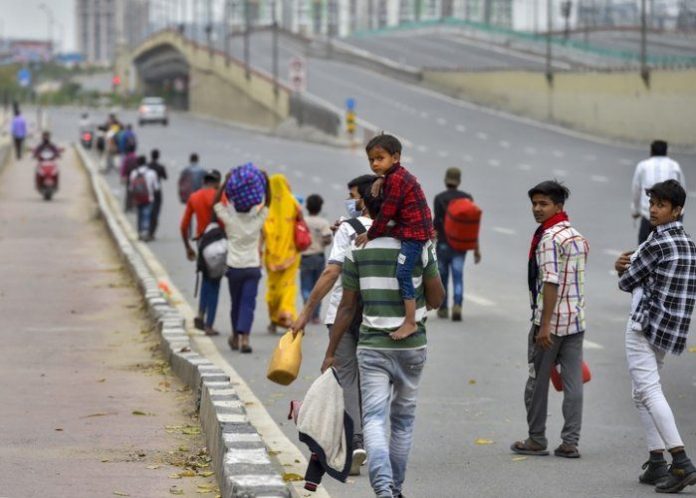 New Delhi:  As the Supreme Court will on Monday hear a petition seeking relief for thousands of migrant workers, a  practicing lawyer on Saturday appeal to  Chief Justice of India  to make suo moto intervention for mitigating the sufferings of migrants  who are stranded at highways, interstate borders  and bus stations.

In an open letter sent to CJI, Advocate Shahbaz Ali  said  the authorities should take  immediate actions for safety measures and transport facilities to migrants and jobless workers who are leaving for homes due to amid lockdown due to corona virus.

“I write to you with deep anguish and with a great stab of pain in my heart, that it is need of hour and incumbent upon me to address this letter to you to raise my concern over the migrants and jobless workers who are leaving for homes on foot amidst lockdown in the Country.”

On March24, a nationwide lockdown was announced by the Modi  Government without any planning.

The letter stated that “In   view of the news and pictures are appearing about the migrants and jobless workers who have to leave for their homes as landlords are forcing them to leave from their rented house and other unavoidable circumstances is human rights crisis in the country.

In the wake of the coronavirus outbreak and the 21-day nationwide lockdown, since everything is shut down and due to the absence of food and income a number of migrants and jobless workers from various states of India who are working in different parts of country have started returning back on foot to their native places in the absence of any kind of transport facilities”, it added.

He noted that “on their way back to home these migrants are facing a multitude of problems, some of them will have to travel 1000 to 1500 km to reach home”.

“It is also important to mention here that since the announcement, numerous videos have surfaced on social media platforms, showcasing incidents of police brutality being inflicted on migrants and jobless workers who are stranded on national highways and state highways. This is gross injustice and violation of human rights, hence the police actions are inhumane and unbearable.”

In view of  these circumstances,  Advo Ali appealed to the CJI that he should direct authorities to arrange all the safety measures and provide transport facilities for migrants and jobless workers who are returning to their homes and to pass other orders against the police officials for fixing their accountability for inhuman treatment against migrants and jobless workers.

Meanwhile,  a PIL filed in the court  for relief  to the migrant workers    who are leaving big cities en masse for their hometowns because they don’t have the resources to sustain during the 21-day coronavirus lockdown.

“Redress the heart wrenching and inhuman plight of thousands of migrant workers families – women, small children, elders and differently-abled persons – walking on foot for hundreds of kilometers, from cities to their native villages: without food, water, transport, medicine or shelter, amid coronavirus crisis,” the public interest litigation, filed by a lawyer, read.

However, after national outcry, several state governments have arranged for transportation to ferry them to their native towns and villages. However, there are concerns that these workers might take the virus to their hometowns.  Without any contingency plan, the PM Modi last week announced a total shutdown in the country to check the transmission of the highly contagious virus that created a mess and unbearable sufferings to daily-wage workers who left the big cities for their hometowns on foot, as all transport services were halted because of the lockdown.