New Delhi: The Enforcement Directorate (ED) has come out with wild and baseless allegations without any proof  to discredit and malign the on-going nationwide protest against the controversial Citizenship Amendment Act (CAA).

Quoting unknown sources from ED many media outlets have published a report that Rehab Foundation of India (RFI), has funded over Rs 120 crore for the protest.

The ED also alleged that the payments were made to senior Congress leader Kapil Sibal, senior advocates Indira Jaising, Dushyant Dave and a person named Abdul Samad, who is also named in National Investigation Agency (NIA).

Speaking to IANS, Sibal said, “I have never received any amount from any organisation except through litigation. And I don”t even remember. Give me the dates of the receipt and then I shall find out and let you know.”

Sibal, who is also a senior lawyer, further said, “if I would have received the payment then it must be a cheque payment, as I don”t take cash.”

He said: “If this amount has come to me through bank transfer then I must have raised a bill for a case. And if that amount is paid for legal services then what is wrong in that?” he said.

Sibal also said that he has never appeared for any one linked behind the anti-CAA protests.

“I have not represented any of the PFI cases and also not of the anti-CAA protesters. PFI has never paid to me,” he said.

Advocate Indra Jaising has vehemently denied having received any money from any person of organization in relation to anti-CAA protests.

Sharing a statement on her Twitter handle Jaising said “lt has been brought to my notice that information is being circulated on various media platforms that I am in receipt of Rs. 4 lakhs from Popular Fron t of India (PFI) in relation to anti-CAA protests. I completely and vehemently deny having received any money from PFI at any point of time, or receiving any money from any person of organization in relation to anti-CAA protests”

Popular Front of India has strongly condemned the news reports that are published in various news channels regarding Front’s financial link to instigate the CAA protest.

‘We fully comply with the law of the land and the allegation of Rs.120Cr transferred from the Popular Front’s accounts just before the CAA protest is totally baseless and the people who are levelling these allegations should prove these claims”  said  Front in a press statement.

Few news channels also allege funds transferred from the Kerala state Popular Front of India account for advocates like Kapil Sibal, Dushyant Dave and Indira Jaising. This malicious report quoted from unknown sources also  exposes the intention of the vested interested who are keen to blame Popular Front for everything that is happening in India. The truth is that transfers were made in 2017 as a lawyer fees for these advocates for the Hadiya Case. This transfer was openly declared by Popular Front in various public meetings. Attributing a fees transfer that happened in 2017 as a funding for 2019 CAA protest is totally absurd and exposes the intention to defame Popular Front, it said.

“Another allegation levelled is the transfer of funds to Popular Front’s Kashmir Wing. It is a open fact that Popular Front of India does not have any wing or branch in Jammu and Kashmir. We challenge the so called “Unnamed Sources” to prove that there is any wing of Popular Front working in Kashmir. Popular Front carried out extensive flood relief work in Kashmir in 2014 and built more that 100 houses for the flood victims which were also openly declared by the organization in 2014 itself through official publications. Assigning the 2014 flood relief as 2019 anti-CAA protest funding makes it clear that there is a planned vilification campaign going on against Popular Front to stop our growth”  said the statement.

“We are confident that the fate of these series of allegation will also be like the ones before which could never be proved. Recently the UP and Assam government alleged Popular Front’s role in the anti-CAA protest related violence and even arrested our state level leaders. But their claims proved to be nothing but imaginations when they could not prove anything in the court and our leaders were released on bail” said the statement.

Popular Front will not be bowed down by such cheap campaign by the forces backed by the fascist who want to stop us. We will continue our struggle against the fascist forces who try to suppress the voices of dissent, it added. 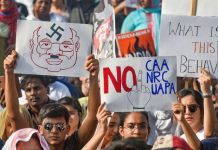 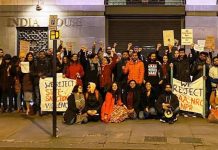 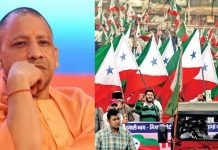 108 PFI members arrested in UP till now: DGP