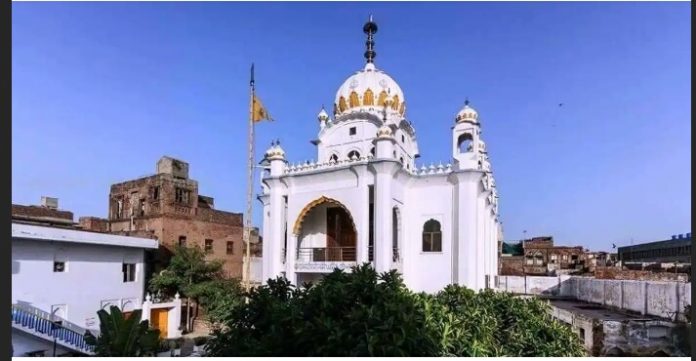 Nestled in the crowded Lunda Bazaar, known for selling used articles in Pakistan’s historic city of Lahore, is a two-storey white building with a small dome and a Sikh religious flag Nishan Sahib fluttering next to it. Though, hardly anyone visits it, a Sikh priest takes out holy scripture Guru Granth Sahib and recites it daily, before putting it back in a special room.

The history of the building known as Shahid Ganj Gurdwara (Sikh place of worship) has striking resemblance with the dispute of Babri Masjid, located in the northern Indian city of Ayodhya in Faizabad district of Uttar Pradesh province. The mosque was demolished by a frenzied Hindu mob on Dec. 6, 1992, which also set up a makeshift temple on its debris.

As Indian Supreme Court has indicated that it will wrap up world’s oldest civil dispute by November, to decide whether the site of Babri Masjid belongs to Hindus or Muslims, legal experts representing Muslim parties are citing the case of Shahid Ganj Gurdwara, seeking restoration of the mosque and right to offer prayers.

The Babri Masjid dispute which started in 1853, when Hindus first time claimed the site, has devoured millions of lives in communal riots. They claimed that the pantheon of Hindu upper caste mythology Lord Rama was born there, some millions of years ago. The mosque was built by Mughal Emperor Babur’s military commander Mir Baqi in 1528.

Earliest court records suggest that in 1885, a British judge of Faizabad District Court had rejected Hindu plea. The issue again reached to court in 1949, this time by Muslims pleading the removal of an Idol of Ram, which some Hindus scaling the wall in the dead of the night, had placed inside at the sanctum sanctorum of the mosque.

Along with stripping special status of Jammu and Kashmir, India’s ruling Bharatiya Janata Party (BJP) had made construction of grand Ram Temple on the site of the Babri mosque an electoral issue since 1985. Early 90s, it launched a movement that culminated into the demolition of the mosque.

A five-judge constitution bench of apex court, headed by Chief Justice Ranjan Gogoi, has now indicated that it will complete hearing on the issue by Oct. 18 and deliver judgment by Nov. 17. Justice Gogoi will retire on Nov. 18 from judicial service.

Constructed by Kotwal (Chief Police Officer) of Lahore Abdullah Khan, during the reign of Mughal Emperor Shah Jahan in 1653, Shahid Ganj was a mosque till 1799, till Sikh Army under Maharaja Ranjit Singh captured the city defeating Afghans. “A unit of Sikh Army camped in the mosque and soon converted it into a gurdwara [Sikh place of worship],” says historian A. G. Noorani, who has also authored a two-volume book, Destruction of the Babri Masjid – A National Dishonour, a compilation of documents, primary source material and related cases.

In 1849, when British took control of Lahore by defeating Sikh Empire, Muslims pleaded for the return of the mosque. A year later custodian of the mosque Noor Ahmed knocked the court, pleading that the mosque be restored, as it was forcefully converted into gurdwara. He succeeded to the extent to convince judges by producing documents that the site was originally a mosque prior to 1799 and regular prayers were being held, till the entry of Muslims was barred by the Sikh Army.

But the court using law of limitations, rejected the plea and questioned the delay of 51 years for claiming the mosque. On June 25, 1855, Ahmad brought another suit against the Sikhs, which was also dismissed. The issue reached to the higher judiciary, which upheld the order of Lahore judge. The London-based Privy Council, the highest court of appeal during British era also disposed the case, rejected Muslim claim on May 2, 1940.

The law of limitations set by the British and then adopted by India in 1963, stipulates a maximum period of 12-30 years to claim immovable properties from adverse possession. According to lawyer Anubhav Pandey, the intention of this law is that “controversies are restricted to a fixed period of time, lest they should become immortal, while men are mortal”.

In 1850-1935, Lahore and adjoining areas of Punjab province witnessed worst communal riots, between Sikhs and Muslims on the Shahid Ganj. In 1935, British Governor of Punjab, Sir Herbert Emerson suggested that the site be handed over to Archeology Department to be declared as protected site, as a mid-way to settle claims. When the issue was being discussed, a Sikh mob in the dead of night demolished the structure, removing traces of a mosque.

Faith versus law of limitation

Noorani documents that when Muslims took away a procession from historic Badshahi Mosque in order to reach Shahid Ganj, police fired on the crowd. Many Muslims died and curfew was imposed in Lahore and vast areas of Punjab. In 1925, the Sikh Gurdwaras Act was passed and the Shahid Ganj Gurdwara included as a Sikh shrine.

“In 1936, when Unionist Party in alliance with Muslim League assumed power in Punjab, legislative assembly members presented a resolution to overturn court judgement, in order to facilitate handing over of the site to Muslims. But Pakistan founder M A Jinnah put his foot down and apprised Muslim leaders that it will open Pandora’s Box all over India,” said Noorani. Otherwise a strong critic of Jinnah, the historian appreciates him for not using the emotive issue of mosque to further his politics.

Senior journalist and researcher Akshay Mukul suggests that the litigation over Shahid Ganj was very similar to the one being contested over Babri Masjid. Seven years after the Privy Council judgment, India was partitioned, leading to the creation of the Islamic Republic of Pakistan. But, Gurdwara Shahid Ganj still stands at the same site and hosts Sikh pilgrims coming from India and other countries.

Lauding Pakistan for protecting gurdwara, even when there is no Sikh left in Lahore to visit it, distinguished educationist Amrik Singh noted that the character of that building has not been changed and it has not been converted into a mosque. Noorani asks: “If this can happen in Pakistan, which according to its constitution is described as an Islamic nation, can India, which describes itself as a secular state, act differently?”

He believes that British courts and then behavior of Pakistan, has shown the way to deal with an issue when faith is put forward as the governing principle in place of reason. AA