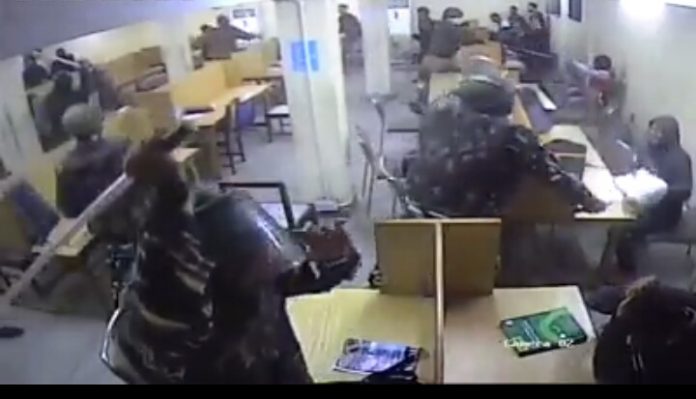 New Delhi: Amid the Delhi Police lies have been nailed regarding its brutal attack on Jamia Milia Islamia students, London based rights advocacy group, Commonwealth Human Rights Initiative’ (CHRI) on Wednesday called for the immediate registration of a First Information Report (FIR) the guilty police personnel as it said the videos of CCTV footage publicly released in the last two days further evidence the use of excessive force. The group also called for rigorous, independent investigation of the Police excesses.

The group alleged the Delhi Police has still not registered an FIR and began a criminal investigation into the use of force by police which indicates deliberate delay, cover up and obfuscation by them (Police).

CHRI said the complaints filed against police and uniformed personnel for excessive force against students at Jamia Milia Islamia on December 15, 2019 should be followed by rigorous, independent investigation.

It added that the videos of CCTV footage publicly released in the last two days further evidence the use of excessive force. The videos made available by the Jamia Coordination Committee clearly show uniformed personnel in riot gear indiscriminately beating unarmed students inside the Jamia library.

Devika Prasad, Programme Head, CHRI, said, “The evidence of disproportionate and excessive force is unequivocal and calls for immediate registration of an FIR and the Jamia administration has already submitted complaints and this CCTV footage to Delhi Police in December 2019.

In spite of these overwhelming prima face grounds, Prasad said two months later, the Delhi Police has still not registered an FIR and began a criminal investigation into the use of force by police. This indicates deliberate delay, cover up and obfuscation by the Delhi Police”.

He noted that the delay, denials, and attempts to destroy potential evidence by the Delhi Police raise serious doubts of the police establishment’s intent to properly investigate against its own.

He said CHRI reiterates its recommendation that the Delhi High Court orders an independent judicial inquiry to:

1) identify and name each of the police/uniformed personnel involved in the violence on Jamia’s campus on 15th December,

2) assess the use of force against the standards of proportionality, reasonableness, and necessity; and compliance with all mandated procedures,

3) assess the extent of physical harm and injury caused to all affected individuals and to University and public property, and

4) establish the role of senior officers in ordering and supervising the police strategy and action.

He further said the aim of the inquiry should be to gather the strong prima facie grounds needed to lay the path for prosecution of all officers/personnel involved. Considering all the hard evidence already available in the form of eyewitness accounts, videos, and photographs, it will only be support to impunity which will prevent a robust inquiry from taking place.

Students are literally trapped between uniformed personnel swinging blows on them. The destruction of University property by the personnel – chairs, desks, doors – is brazen and unabashed. The police were s caught out on its earlier version that they did not enter the Jamia library.

Moreover, in light of these videos, the Delhi Police’s assertions against student accounts come under scrutiny as there is no indication of the presence of any so called armed rioters. The uniformed personnel cannot be seen to be taking any steps to lawfully apprehend anyone. The clear shot of a man in uniform, with a masked face, smashing the CCTV camera, reveals destruction of property, and evidence, by a law enforcement officer.