New Delhi :He is the Man Who Knows Too Much, Dr Karan Singh or Tiger as his father Maharaja Hari Singh used to call him fondly, formerly Regent of J&amp;K (from June 20, 1949, he acted as Regent), then Sadr e Riyasat (from November 17, 1952 to March 30, 1965, Karan Singh was the elected head of state of Jammu and Kashmir). On 30 March 1965, Karan Singh, who became the first Governor of Jammu and Kashmir (till May 15, 1967) and the last residual link between feudal and monarchial Kashmir and its evolution to a democratic set-up, wants the government to tread cautiously on constitutional issues related to J&amp; K.

Despite being a centrifuge in the early years of India”s independence and Kashmir”s contentious accession, no political party has chosen to use his sagacity and wisdom while dealing with the Kashmir problem. Even as four districts in south Kashmir and a few hawks sitting in Srinagar hijack the nationalistic agenda and argue for separatism, the new Home Minister Amit Shah is rolling out a plan to meet fire with fire and try and settle the controversial issue once and for all.

met the 88-year-old son of Maharaja Hari Singh, the last Ruler of J &amp; K who acceded to the Union of India, and posed several important questions to him on the future course of action for the state which requires an urgent salve and a resolution. The octogenarian with a razor sharp memory straight off the bat said, “Let me start by saying that the accession is final and irrevocable, nowhere am I questioning its wajood (existence). This accession has been confirmed and validated by the J&amp;K Constituent Assembly which lies dissolved, so there can be no questions asked about its veracity. Legally, morally and constitutionally, the state is part of the Indian sovereign. However, on Article 370 and 35A, I would advise extreme caution: tread carefully for there are legal, political, constitutional and emotional factors involved which should be thoroughly assessed, I think that is fair warning.”

On being pressed further, he argued that, “Please understand there are four critical dimensions to this problem, for starters there is an international dimension with 45 per cent of the original state”s area and 30 per cent of its population (as of October 26, 1947) having been sliced away over the years. Remember that both Pakistan and China are sitting on our territory. We may live in denial and every once in a while talk of Pakistan Occupied Kashmir, but there is also Gilgit, Baltistan and the Northern Territories, the largely inhabited Aksai Chin and Shaksgam and Yarkand River Valleys which run adjacent to the Trans Karakoram Tract which have been lopped off.

“In fact, till 1963, the last part was considered part of J&amp;K by Pakistan. It is easy to say ”Kashmir hamara hai”, but for 50 years I have stayed in Delhi and not once have I seen the ”dard” of this hapless and star-crossed state in Delhi and India. Only lip service has been offered instead.”

The second dimension, according to Karan Singh, is the nature of the relationship between the Centre and state, and this is where various sensitivities come into the equation.

As Karan Singh recounts, “When the Instrument of Accession was signed by Bapuji (Maharaja Hari Singh) in Jammu, he signed off on merely three issues. Under this instrument of accession, Jammu and Kashmir surrendered only three subjects, which was defence, external affairs and communications to the Indian state and earned an assurance from India that the people of Jammu and Kashmir through their own constituent Assembly would draft their own constitution. Which happened.

“I summoned the Constituent Assembly based on the Delhi Agreement between Pandit Nehru and Sheikh Abdullah. The J&amp;K Constitution made by the State Constituent Assembly became law on January 26, 1957 with my signature. Remember, Sheikh Saheb had already been arrested in 1953. Both Article 370 and Article 35A came into existence and they cannot be changed with approval of the J&amp;K Constituent Assembly which has since been dissolved. A catalogue of items from the Union List were subsequently brought in. While the accession remain undisputed, the relationship between the Centre and state has never been settled. The Centre has its own views, the state”s polity holds diverse views and now new hawkish elements profess a different set of views. The whole thing is up in the air.”

The most important point of the instrument of accession was that its ruler and formal head Hari Singh decided and declared that the state of Jammu and Kashmir accede to the ”Dominion of India” with a clear result that from here on “governor-general of India, the dominion legislature, the federal court and any other dominion authority established for the purposes of the dominion” would be legally authorised to carry out any function in respect to the state of Jammu and Kashmir, as vested in them by or under the Government of India Act, 1935.

However, to retain its special status it added two important clauses which stated: “The terms of this my Instrument of Accession shall not be varied by any amendment of the Act or of the Indian Independence Act, 1947, unless such amendment is accepted by me by an Instrument supplementary to this Instrument.”

Sheikh Abdullah writing to Nehru on July 4, 1953 prior to his arrest later that year showed the disturbed mind space he was in “when Article 370 was devised, we felt assured by the statement from Sardar Patel that the Instrument of Accession would be the final basis of India-Kashmir relationship. Subsequently, when the Delhi Agreement came up before the Council of State on August 5, 1952, Gopalaswami Ayyangar stated that Article 370 was not a permanent feature of the Indian Constitution and ”when the time was ripe”, this provision could be removed from the Constitution.”

Further Karan Singh reckons that the dimension of regional aspirations cannot be ignored for the state of J &amp;K now has three clear linguistic and geographical divisions – Jammu, Kashmir Valley and Ladakh and these remain un-integrated despite 72 years having passed. He avers: “From the foothills of Jammu right up to the heights of Gilgit, Ladakh, Kargil, the inhospitable terrain of Siachen and Saltoro Ridge right down to the wasteland of Aksai China, it was part of a Dogra Empire ruled by a dynasty for 100 years. It is the might of the Dogra soldiers under Gen. Zorawar Singh and Baaz Singh who took it to those heights. Our neighbours were Soviet Union and China and we maintained border and territorial integrity with both.

“It was a remarkable state, unique in India and we should always be thankful to the Sikhs and Dogras for keeping a unified Jammu and Kashmir which incidentally was larger than France at the time of accession. It is only after the UN ceasefire and endless hostilities that Mirpur, Muzzafarabad Gilgit Agency et al came into being as PoK. The three units left with us – Jammu, Kashmir and Ladakh – have always had a rocky and uneasy relationship with each other since there has never been a fair division of power. I believe the Dogras have been rubbished by history and the balance of power in the state needs to be restored with both Jammu and Ladakh being given their rightful place. I am happy to note that Kargil and leh have now been recognised as hill councils but the way forward has to be empowered and elected regional councils for better interface and functioning.”

Finally, Karan Singh spoke about the fourth dimension which zeroes in on the humanitarian aspect — all over the Valley there are ”kabristans” with thousands of human lives lost, Kashmiri Pandits have been chased away from home and hearth, many still live in camps in Jammu and Udhampur, the Dogras have never been given the respect they deserve and of course all the people who reside in border villages live a life of daily hell when the unabated shelling continues.

“Who is responsible for this universal suffering, where is the aid for the harassed people of the state? The state is not merely Kashmir but J&amp;K. What does a resolution mean, what are its contours, does it include these four dimensions? I have been ignored by history after being Regent and Sadar e Riyasat, Sonia Gandhi and Manmohan Singh went innumerable times to the state during the decadal UPA rule but not once was I taken by them. The report of the interlocutors was neglected and the situation in the state has gone into a tailspin.”

For some reason, Karan Singh believes that the state has a maligned destiny and its people are jinxed for in 1964 Sheikh had been sent to Pakistan with a formal proposal for a solution, but while he was there, PM Nehru died and nobody knows what the true contents of that settlement were? He actually went carrying Nehru”s missive. Similarly, the Musharraf-Manmohan four point formula pretty much resolved this imbroglio but that too fell through because of various reasons.

The action plan comprised demilitarisation or phased withdrawal of troops, that there will be no change of borders of Kashmir, but people of Jammu &amp; Kashmir would be allowed to move freely across the Line of Control (LoC), self-governance without independence and a joint supervision mechanism in Jammu and Kashmir involving India, Pakistan and Kashmir were within the grasp of both governments but it is reported that the Indian Cabinet, L.K. Advani and separatist leader Syed Ali Shah Geelani at different points proved to be impediments.

In fact, even late PM Atal Bihari Vajpayee was said to be somewhat suspicious of Musharraf given that Kargil scars were fresh in everyone”s minds.IANS 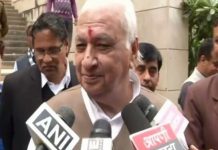 Sitting on roads in protest is a form of terrorism, claims Kerala governor Arif Khan