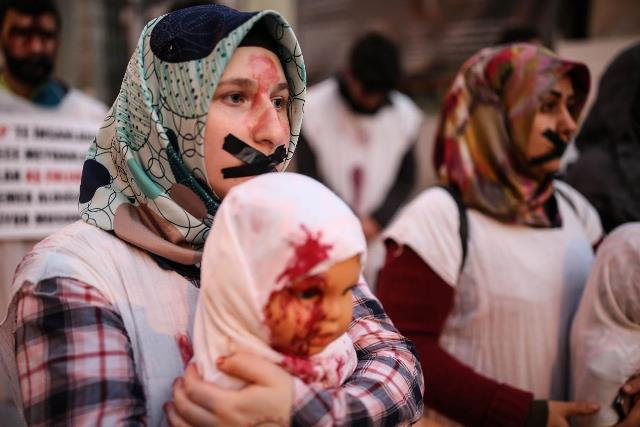 The heroic resistance inside the besieged walls of eastern Aleppo is coming from the Syrian people themselves, and not foreign fighters as is often portrayed in the Western media, says a journalist trapped inside the most dangerous place on earth. New Yorker Bilal Abdul Karim went inside Aleppo four months ago during a short break in the siege but his three day assignment has now extended to four months; it is impossible to leave unless he walks from the rebel-held city and into the hands of Syrian government forces.

“I’m a black man with a beard,” he told me. “I don’t think I would last very long in the hands of the regime.” Abdul Karim pointed to UN reports that hundreds of men went missing last week after crossing into government territory.

The journalist was quite blunt about the future. In an exclusive interview marking Human Rights Day, he admitted, “We’re living on borrowed time here but there are still opportunities for good to prevail.”

Although the situation looks bleak now that Syrian regime forces have seized around 85 per cent of the eastern parts of the city from rebels in recent weeks, Abdul Karim said that it is vital for people around the world not to be misled about what is happening on the ground in Aleppo. There are still nearly 300,000 Syrians trapped there, he explained, but out of those only 10,500 chose to leave during a humanitarian pause last Thursday. The number of those leaving last week has been confirmed by all sides, including Russian officials and UN observers; estimates of those left behind, though, vary from 100,000 to 300,000.

“If so many people chose to remain in a siege situation without food and comfort and would prefer to face barrel bombs and bunker busters, shells and missiles,” he asked, “what does that tell you about the Bashar Al-Assad regime?” Nobody, he insisted, was forced to stay. “The fact is, of those who left, hundreds of the men have disappeared. That speaks volumes about the activities of the Syrian government forces.”

Abdul Karim’s fears for the safety of the men who left rebel-controlled Aleppo echo those by Rupert Colville, the spokesman for the UN High Commissioner on Human Rights: “Given the terrible record of arbitrary detention, torture and enforced disappearances by the Syrian government, we are of course deeply concerned about the fate of these individuals.” Colville has received reports that men aged between 30 and 50 were separated from their families while other displaced people reported being taken in for questioning and having their identity cards confiscated.

Another myth that Abdul Karim is keen to dismiss is the presence of foreign fighters. “I’ve met three Egyptians and one from Uzbekistan but the rest of the men who stand between Bashar Al-Assad’s forces and the people of Aleppo are local men from Aleppo as well as Syrians from the Free Syrian Army.”

He acknowledged that he hasn’t spoken to everyone on the ground, but he knows lots of people and the rebels are local men. “When I’ve interviewed them they point out their homes or the streets where they lived. There is a narrative put out that the rebels are foreign fighters and that all the fighters are terrorists; it’s simply not true. The only terrorists in Syria are Daesh and they do not have a presence in Aleppo.”

When Russia joined in the war last year, Putin announced that it was to get rid of Daesh, Abdul Karim reminded me. “If that’s the case, why are the Russians bombing the men, women and children of Aleppo?” The US, he believes, has also played its part in misinformation and he thinks that it is quite clear that Washington is using Daesh to have a presence in the region. “How easy would it be for British and US war planes to drop food and medicine in Aleppo instead?” he asked. “If they can drop bombs on Daesh they can bombard us with humanitarian aid.”

During the interview, news filtered through about human rights campaigner Peter Tatchell disrupting a speech being made in London by Labour Party leader Jeremy Corbyn. As Corbyn started speaking about human rights, demonstrators stood in front of the podium and held up posters calling for immediate air drops of food aid in Syria. Tatchell has been critical of the leader of the opposition as well as Britain’s anti-war movement for failing to speak out loudly enough against Russia, which is propping up Assad’s brutal dictatorship.

As the other protestors stood silently in front of Corbyn, Tatchell shouted: “What is happening in Aleppo is a modern day Guernica. We haven’t heard the leader of the Labour Party speak out enough to demand UK air drops to besieged civilians who are dying in their thousands.”

News of the protest was welcomed in Aleppo, said Abdul Karim. “I really applaud his efforts and I am so glad he did not remain silent on Human Rights Day about what is happening in Syria. I do not agree with everything he does and says but I think people who have the courage to stand up for the oppressed across the board deserve to be applauded.

“I would ask those on the left and in the anti-war movements this: How can you be a champion of human rights if you remain silent when Russia flies war planes dropping bombs and you then oppose the dropping of medicine and food parcels from other forces and oppose the introduction of no fly zones?”

“China may not have a presence on the ground but it is blocking attempts to impose UN sanctions and other useful, meaningful initiatives. I would urge people to start boycotting Chinese products and goods. Let the chorus of voices come together and raise the volume for the people of Aleppo, Idlib and other areas in Syria.”

The New York-based journalist dismissed peace talks between Moscow and Washington: “Who is negotiating on behalf of the Syrian people? If the Syrians are not willing to accept a ceasefire alone does that not tell you how they feel towards Assad remaining in power? In Aleppo they are starving; they are without food and water and live daily under the fear of barrel bombs, rockets and even chemical attacks and yet they would prefer to remain than leave the rebel-controlled areas.”

Although the imminent arrival of Donald Trump in the White House does not inspire confidence in the possibility of finding a solution, he concluded, no one was enthusiastic about Hillary Clinton either. “They were regarded as Bad and Badder.”

Just as the interview with Bilal Abdul Karim came to a close, news also came in of an initiative from Turkey involving a land convoy led by Humanitarian Relief Foundation, known by its Turkish acronym of IHH. The convoy is planning to set off at 11am on 14 December from Istanbul with participation from every area of Turkey, including Sakarya, Ankara, Konya, Kayseri and Kahramanmara?. There will also be some overseas involvement. On its way to Syria, explained IHH, the convoy will encourage local protests against the bombing of Aleppo.

It is clear from the international make-up of this convoy and the massive opposition to what’s happening to their fellow human beings in Aleppo across social media that ordinary people around the world want their governments to act now in order to save innocent Syrians from further death and destruction. The big question is, why are those governments — particularly in the US and Europe — so reluctant to act?

* Bilal Abdul Karim is one of the founders of On the Ground News an independent news gathering operator based in Syria.

2 thoughts on “Massacres in Syria’s Aleppo ; why are Western countries so reluctant to act?”