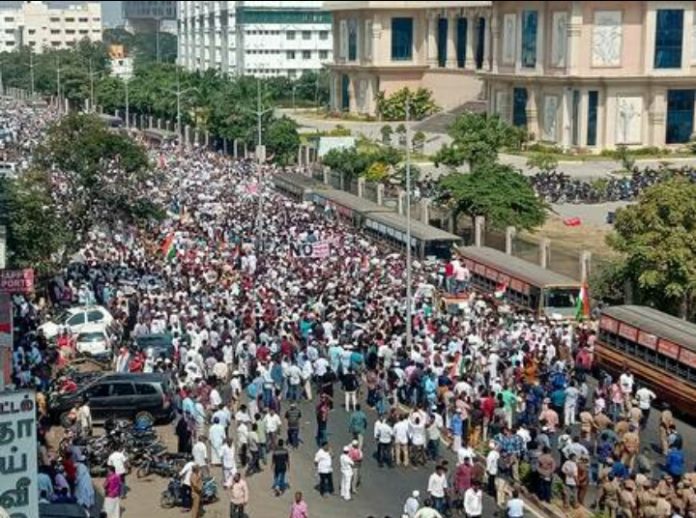 Chennai, Feb 19:  Tamil Nadu came to a standstill today following a massive rally by Muslims including women and children to lay siege to secretariat in Chennai and collectorates in district headquarters. The decision to continue with picketing of Tamil Nadu government secretariat was taken by Tamil Nadu Jamaathul Ulema Sabai alongwith political party leaders in Chennai.
Defying Madras High Court interim stay till March 10 against picketing and laying siege to secretariat and district collectorates, Muslim outfits in unilaterally resolved to stage the rally across the state, come what may. Women alongwith tiny-tots took active participation in the rally which commenced from Anna Road in Chennai. However, the protestors were blocked near Chepauk cricket stadium by a strong contingent of police.

Unmindful of the consequences, the protestors braving the heat shouted anti-CAA, NPR and NRC slogans agains both the Central and State governments. Tamil Nadu Jamathul Ulema Sabai president and other political outfit leaders spoke condemning the Tamil Nadu government for showing scant regard to the feelings of minority community.
The three hour long rally and protest ended off peacefully in Chennai and other parts of the State. In Chennai, over 10,000 police personnel were deployed near Secretariat besides drone cameras were used for surveillance. Barricades were placed on the main thoroughfare near secretariat besides water canon and striking force personnel were deployed.

Likewise, the temple city of Madurai also witnessed a massive rally by Muslims and in Tirunelvelli, the protestors were blocked near Palayamkottai just before the collectorate. Similar rallies were held in Pudukkottai, Kanyakumari, Cuddalore, Tiruvannamalai, Virudhunagar, Dindigul, Salem, Krishnagiri and Dharmapuri districts. Meanwhile, Tamil Nadu Jamathul Ulema Sabai alongwith other Muslim outfits is contemplating on next course of action if the Tamil Nadu government fails to adopt a resolution against CAA, NRC and NPR in the ongoing assembly session which concludeds tomorrow.