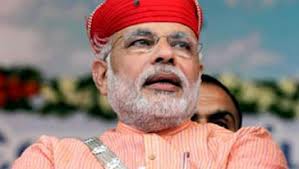 Ahmedabad, Dec 26: Cheered by hundreds of thousands, Narendra Modi Wednesday took oath as Gujarat’s chief minister for the fourth time, after leading the BJP to a sweeping win in assembly elections.

Governor Kamla Beniwal administered the oath of office and secrecy to the 62-year-old Bharatiya Janata Party leader, who has ruled Gujarat since 2001, at the Sardar Patel Stadium here.

An estimated 2.5 lakh people packing the ground roared in joy as a visibly confident Modi took the oath in Gujarati.

After the brief ceremony, the chief minister went around the stadium in an open vehicle, waving to the cheering crowds and flashing a ‘V’ sign.

Before leaving for the venue, Modi tweeted: “Leaving for swearing in ceremony. Glad to see love of so many people and the presence of distinguished leaders.”

A still earlier tweet of Wednesday by Modi said: “To make a great future India, the whole secret lies in organization… coordination of wills.”