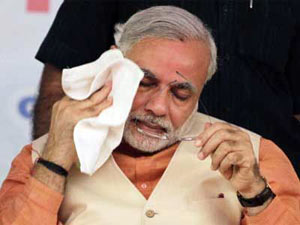 Bhopal: The Press Council of India chairman Justice Markandey Katju, who is a retired judge of the Supreme Court of India, has termed Bharatiya Janata Party’s, (BJP), two Chief Ministers viz. Gujarat’s Narendra Modi as the worst while Madhya Pradesh’s Shivraj Singh Chouhan as one of the best in the country.

The 2002 Gujarat pogrom wherein thousands of Muslims were massacred in the state under Modi’s rule is a big blot on him which can never be washed away. Quoting English literary giant Shakespeare he said: “All the perfumes of Arabia cannot wipe the stains of the blot”. He said I can never forgive him for his crimes of such magnitude against humanity.

In an interview to this Correspondent Justice Katju asserted that the aura of development in Gujarat is all phoney and fake as the rural poverty in the state is 51 per cent. There is no real development in Gujarat but with his cocky attitude Modi he impresses that he is all-knowing and tries to paint a rosy picture to befool people.

On the contrary vital statics about Gujarat speak otherwise as the living standards of the common people was still “abysmal”. The test of every system is whether the standard of living of the masses is rising or not. Modi was no doubt successful in projecting an image of ‘Gujarat Shining’ under him. But the stark reality is very different, he asserted. No doubt Modi has given huge concessions to big industrial houses, giving them cheap electricity, land, etc. and has built roads, etc. But what about the standard of living of the masses ?

To prove his point Justice Katju pointed out figures about the state which include: 1. Child malnutrition at 48 per cent in Gujarat is higher than the national average, far higher than the poorest African sub Saharan countries of Somalia and Ethiopia where the rate is about 33 per cent; 2. The infant mortality rate in Gujarat is 48 per thousand, which is the 10th worst in India; 3. More than a third of Gujarat’s adult men have a body mass index of less than 18.5, the 7th worst in India; 4. Gujarat has a high maternal mortality rate; 5. Education, health and income levels in Gujarat is placed it after 8 other Indian states.

He informed that when Modi was confronted with malnutrition in the state he did not deny it but claimed that as girls in Gujarat are beauty conscious they do not eat or drink milk for fear of becoming fat, the people are vegetarians etc. which is all nonsense. He questioned should the Gujarati children eat the factories, roads and electricity Modi has created ?

“Yeh Sab Behuda Batein Hain. Modi is a big fraud and a dramatist and his best place should have been in the film world”, he remarked. The time may come when the people of the state would themselves realise that the development about which Modi boasts a lot was of no use to them, he said.

On the other hand Justice Katju said that in sharp contrast, there was no blot on another BJP-ruled state Madhya Pradesh Chief Minister Shivraj Singh Chouhan’s name. There has been no major communal conflagration in the state under his seven year rule.

He said the abbreviation CM stands for Chief Minister and Common Man both. “I am told that Chouhan is known as Common Man and CM denotes this. I was struck by Chouhan’s humility and modesty and found him to be a very polite and humble person”, he said.

Justice Katju said that he met Chouhan two days ago and invited him to attend an ‘Mushaira’ (Urdu poetry meet) and the chief minister promised that he would come for only 15 minutes. He said that when Chouhan came, he extended his stay to 50 minutes and appreciated Urdu poetry. He said Chouhan also has promised to do all that he can for the development of Urdu in Madhya Pradesh.

“I neither belong to BJP nor Congress. I am people’s representative and try to highlight the truth whether one likes it or not. I have criticised Chief Ministers Mamta Banerjee of West Bengal and Nitish Kumar of Bihar in the past. Mamta gets anyone arrested by police whosoever criticizes him which is very unfortunate. While Nitish Kumar’s claim of “Bihar Shining” is also hollow” Justice Katju stated.

“I am told that it is all media management which has put people’s woes under the rug. Wherever I went I found poverty staring people in the faces with problems of unemployment, no electricity, people are migrating to other states to make a living”, he lamented.

Meanwhile, Justice Katju strongly condemned the recent gang-rape incident in New Delhi and opined that those who are found guilty by a court of law should be given harsh punishment. He, however, wondered at the same time whether the same hue and cry which has been raised about it in the media and in Parliament about this incident would have been raised had this incident happened in some other part of India, particularly in rural in Madhya Pradesh or any other state. “I am sure it would not. But surely Delhi is not the whole of India”, he added.

He was also very critical of hue and cry raised by Anna Hazare and his entourage in their campaign against corruption which media hyped as “second” or “third” revolution. He questioned whether even one per cent corruption has been reduced.

He clarified: “I am not trying to justify rape but I only request people to maintain a balance and not hype the Delhi gang-rape incident as if it is the only problem in the country. Section 376 Indian Penal Code already provides for a maximum of life sentence for rape, and I see no reason why capital punishment should also be provided for it”.

It may be mentioned here that Justice Katju was in Bhopal in connection with Urdu Heritage Caravan and Press Council of India meeting. ( pervezbari@eth.net)