Khabib Nurmagomedov who is a Russian professional mixed martial artist and a two-time Combat Sambo World Champion and the reigning undisputed UFC Lightweight Champion further said “They reflect the true image of our ethics. I feel that Allah is standing with him [Salah], and our new generations need those who are like Mohamed Salah to learn humility, no matter how famous and innovative you are. He’s an icon that we must protect, and we stand behind him so he can continue to succeed. I admire him and the ethics and values he spreads every day in Europe.”

Khabib himself  currently holds the longest undefeated streak in MMA, with 27 wins, and remains undefeated in professional MMA. Hailing from Russia’s Dagestan region, he is the first Russian and the first Muslim to win a UFC title. As of October 8, 2018, he is ranked at No. 2 in the official UFC pound-for-pound rankings. His headline bout with Conor McGregor at UFC 229 drew 2.4 million PPV buys, the most ever for an MMA event

Khabib Nurmagomedov and Salah are arguably the two biggest Muslim sports stars in the world at present.The Russian fighter nicknamed ‘The Eagle’ has seen his popularity soar after defeating Conor McGregor at UFC 229.

On the other hand, Salah’s record-breaking exploits for Liverpool have earned him millions of adoring fans. Salah scored 44 goals in 52 appearances in all competitions last season while helping Liverpool surge through the Champions League knockout stages while securing a fourth-place EPL finish. With his strike against Cardiff at the weekend, he also became the quickest player to reach 50 goals for the Reds, achieving the feat in just 65 games. 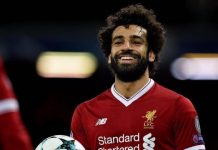