The first and only democratically elected president in Egypt, Mohamed Morsi, died in a Cairo courtroom on June 17, 2019 under suspicious circumstances. Last year, an inquiry [1]led by British lawyers and MPs reviewed the conditions of Dr. Morsi’s detention and concluded that his incarceration constituted “a cruel, inhuman and degrading treatment”, warning that the likely outcome of such a treatment would be his death. Therefore, the question of whether this was a cold, calculated murder, or criminal negligence causing death, is now fully justified. The hurried burial of Morsi only increased the mistrust.

Such a horrific episode prompted the Turkish leadership to take yet another courageous and principled stand for justice. President Erdogan pledged that “in the same way that we did not allow the murder of the late Jamal Khashoggi to be forgotten, we will never allow Morsi’s tragedy to be forgotten”. In a similar vein, the UN Human Rights Office requested an independent investigation into Morsi’s death, which drew similar calls from leading human rights organizations.

The tragic passing of the Egyptian leader has uncovered a complex web of relationships and practices, underpinning the gloomy realities of Middle Eastern dictatorships, Western duplicity, and moral failure. It was indeed staggering to note that Western governments remained silent like ducks at a dark pond. Reflecting on this standpoint, French publication Politis commented in its edition of June 20: “With respect to Morsi, the most established Western democracies, France included, could have at least defended a principle. They remained silent. Democracy is definitely a concept with a variable geometry.”

In fact, the coup d’état engineered by General Abdel Fattah al-Sisi not only represented a fatal blow to the hopes of millions of Egyptians for a democratic future, but it also highlights the catch-22 situation that continues to prevail in the Middle East. On the one hand, Western nations like to give lessons about the merits of democracy and human rights. They pretend to embed ethical and moral factors at the heart of their foreign policy discourse. This pretense is then used selectively to protect democracy in extraterritorial spaces whenever this suits Western interests.

On the other hand, these same nations side with Middle Eastern dictators every time the latter decide to squash democracy. They do so merely to advance their narrow economic interests. Western mainstream media — for the most part — have followed an identical course to that of their governments. The majority of these news outlets have opted for two extremes. At best, they close their eyes to the reality of state terrorism and horrific abuses taking place in the Arab world. At worst, they produce coverage that whitewashes the dictatorships’ exactions, while throwing political jabs and vitriolic comments at these regimes’ opponents.

The news framing of President Morsi’s death followed similar patterns. Several news organizations allocated marginal airtime and print space to this incident. Minimal reporting is in itself a statement. It reveals a reluctance to bear witness even in the face of such a test case, where a democratically elected president, deposed by a military putsch, dies in questionable circumstances after many years of being treated inhumanely and being deprived of his basic legal and human rights.

One can only wonder whether these news outlets would have reacted the same way if the late South African leader Nelson Mandela had been subjected to a treatment similar to that of Morsi. By playing down this dark historical moment, the concerned media outlets not only failed the various litmus tests of empathy, justice, human rights, and general expressions of human solidarity, but also chose to overlook Morsi’s martyrization and the atrocities committed by the al-Sisi regime, thereby becoming, knowingly or unknowingly, complicit in those.

Besides marginalization, the second and most used news framing strategy was to mix Morsi’s eulogy with a diatribe against his presidency and the values he represented. In countless instances, Western mainstream media crafted narratives that did not even pay lip service to how a man stood heroically for democracy against all odds. In contrast, they hedged their reporting with spurious comments about the alleged evils of Morsi’s own political party, omitting the fact that he had won in free and competitive elections.

Le Figaro, the second largest daily in France, produced a biased coverage that exemplified this pattern. Few people know that Le Figaro faces a huge conflict of interests, as it is owned by the biggest French armament group (Dassault). It is, however, well-known that Dassault made huge profits when they sold their fighter jet (Rafale) to al-Sisi in 2015. In this context, the paper’s correspondent in Istanbul, Delphine Minoui, produced an unbalanced piece about Morsi (17/06/2019). In the title, the author starts by describing the late president as “ephemeral”. She went on by stating that “this is the story of a man who should not have been president”. In contrast, the article expressed barely any qualms about Egypt currently having a putschist general at its helm. Obviously, it is not difficult in this particular case to know why.

Even a publication like The Economist, which is renowned for its rigorous editorial standards, failed the test. For example, an article published on June 20 was entitled “Muhammad Morsi, Egypt’s only democratic ruler, dies in court”. Reading the title, many could think that an impartial piece was forthcoming. However, The Economist considered Morsi’s death as “an epilogue for the revolution” and “a footnote”. By engaging in such semantical gymnastics, the magazine frames Morsi’s tragedy as an irrelevant yet final act, which, in its view, brings down the curtain on the Arab Spring. In short, the magazine argues that there will be nothing but dictatorship on the menu for the region. In addition, several word choices in this article were inconsiderate and offensive. For instance, when trying to explain why the Egyptian liberals had voted for Morsi, the piece claimed that “many held their noses and voted for him” as if the late president represented some sort of stinking nuisance, while, in fact, he was a man of high integrity and ethical and fiduciary standards.

Such approaches not only lack tact but also indicate that Western mainstream media has lost its moral compass. In any case, Morsi’s legacy lives on. He has become a symbol of democracy in the region, and millions of people prayed for him in absentia in numerous locations. To cite just one example, last Friday, Algerian demonstrators lauded Morsi, while cursing his killers and the evil they represent. Thus, despite all sorts of biased coverage, the Middle Eastern peoples know all too well who their heroes and villains are, as well as the latter’s sponsors and sycophants.

*The writer is Manager at TRT World Research Centre and the author of “The News Media at War: The Clash of Western and Arab Networks in the Middle East.” Cherkaoui is an expert in the field of strategic communications.

Opinions expressed in this article are the author’s own and do not necessarily reflect the editorial policy of Muslim Mirror. 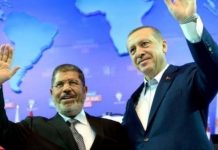